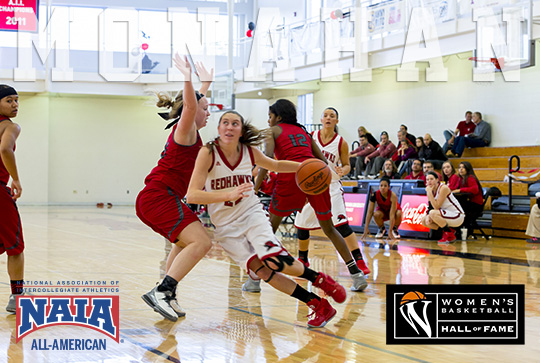 The National Women's Basketball Hall of Fame located in Knoxville, Tennessee has requested the jersey worn by IU Northwest All-American guard Nicki Monahan to be included in the museum's annual Ring of Honor exhibit this coming year. The exhibit will feature jerseys worn by high school and college All-Americans during their 2015-16 seasons. In all more than 100 jerseys will be on display from the nation's most outstanding players in the annual exhibit now through May 2017.

This past season Monahan, a 5’9" junior guard from Portage, Ind. led IU Northwest in scoring at 17.4 points while ranking 9th nationally in free throw percentage at 84.5% and 15th in three point field goal percentage at 41.5%. At the conclusion of the season Monahan was named A.I.I. First-Team All-Conference for the third straight season as well as an NAIA All-American for the second consecutive season after leading the RedHawks to an 22-10 overall record and sixth A.I.I. Tournament Semifinal appearance in the past seven seasons.

“On behalf of her teammates and coaches and the IU Northwest community, we congratulate Nicki on this tremendous honor. It is well deserved for one of the best players in player;’s in the national the NAIA level. We are very proud of Nicki as she represents our program, university and community with class both on and off the court,” said IU Northwest Head Coach Ryan Shelton

The RedHawks set a school record by being represented in the Top 25 National Coaches Poll in every poll throughout the 2015-16 season. She is third player in program history to earn All-American recognition. This past season Monahan became the second player to reach 1,500 career points in a RedHawks uniform and ranks second all-time in scoring in program history.