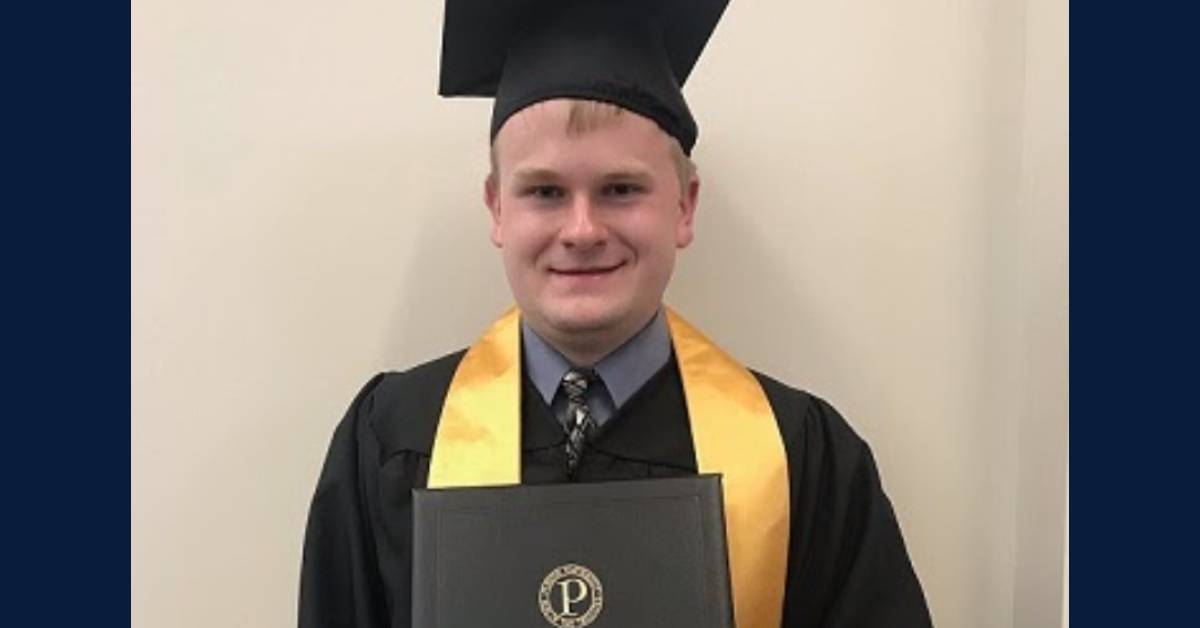 In 2015, Jacob Reed graduated from Ivy Tech Community College with his Associate of Science in Pre-Engineering. He went on to pursue and earn his Bachelor of Science in Mechanical Engineering from Purdue University Northwest and to pass his Fundamentals of Engineering Exam. All these accomplishments are impressive, but they’re even more so when you consider Reed’s powerful story.

Just before starting high school, Reed was an honors student who worked hard to achieve academic success. Because of those high academic achievements leading up through 8th grade, he was placed into three advanced classes for his freshman year of high school. That summer before high school, Reed began having seizures, leading to the discovery of a brain tumor in his left temporal lobe.

The tumor was removed successfully, but its end marked only the beginning of Reed’s challenging journey.  Post-surgery, Reed’s brain was left in an injured state, and once simple tasks, such as recalling and retaining information, became a challenge.

“Post-surgery, I struggled with memory, attention, word retrieval, and mental fatigue,” Reed said. “My surgery was just short of a couple days before my freshman year of high school.  But it forever changed me.  High school was a very difficult experience for me.”

Reed said what followed was a lack of understanding from his high school educators regarding his situation.

“After my surgery, the high school failed to see my abilities and looked instead at my disability,” he said. “They wanted to put me in alternative education that did not match my abilities without even trying to understand my life-changing circumstances that turned my world upside down.”

The school opted to remove him from his honors courses. After two years of fighting back and receiving limited support, Reed’s mother and he decided he should withdraw from the school to pursue an alternative education online. He graduated from high school at the age of 16. Reed attributes his success to his persistence, tenacity, and commitment to education.

“My surgery had impacted my cognitive functions, but it couldn’t take away my drive to do well and succeed,” he said.

Following his high school graduation, he became a student at Ivy Tech Community College in Valparaiso. His bitterness for the disconnect between the education system and students with circumstances like his own soon evaporated. At Ivy Tech, he said, he found the space he so needed and desired in which to flourish.

“Ivy Tech understood my disability and was committed to providing me accommodations so I could have a fair chance at being successful in college,” Reed said. “Entering college, I tested into college-level English and Calculus 1. The disability coordinator had compassion and empathy that I had not experienced previously.”

Ivy Tech Community College provided Reed with both the support he needed and additional opportunities to get involved in student life and extracurricular activities.

“I had tremendous opportunities for professional and personal development,” he said. “I was involved with Student Government, Campus Activities Board, Rotaract, and Phi Theta Kappa.  These experiences shaped me into the person I am today.”

Thanks to Ivy Tech, Reed discovered he had something of a knack for leadership.

“I had many opportunities to develop and refine my leadership skills. My favorite experiences include attending the Ivy Tech Statewide Leadership conference and serving as the SGA Regional President,” he said. “Being the president gave me the opportunity to serve as a spokesperson for students to regional and statewide college leadership.  I was even invited to speak at the Chancellor’s cabinet meeting about student concerns.”

These chances informed the trajectory of Reed’s future interests and opened his eyes to a fact about leadership that is often overlooked or ignored.

“The biggest takeaway I have gotten from Ivy Tech is you have to earn respect as a leader, it doesn’t come from having a title. And a leader isn’t there to tell people what to do, but rather to do just as much if not more than everyone else and get their hands dirty, too,” he said.

Reed’s favorite experience from Ivy Tech was having the honor to address his graduating class as commencement speaker.

“I shared my story with the class, and my message was that you can do anything you set your mind to and you shouldn’t let others define you,” he said.

Reed recently started a job as a railroad/utility engineer with the Indiana Department of Transportation. He said he hopes to one day take his Professional Engineering exam to become a licensed engineer. He offered some advice to those who might be facing similar circumstances as his.

“Never give up!  When times are tough just put your nose to the grindstone,” he said. “The extra effort you put in will all pay off.  Also, stand up for yourself.  If something seems wrong, speak out about it.”