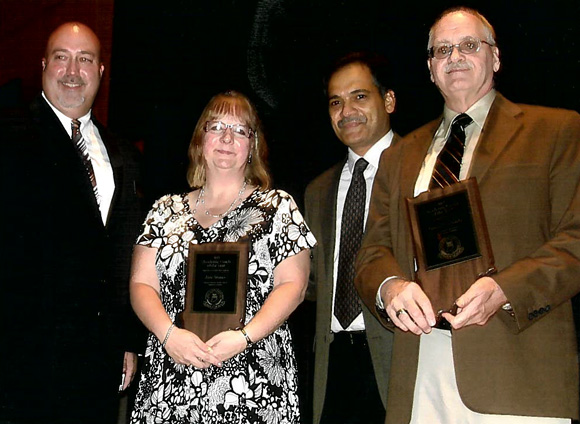 Jane Strayer, a sixth and seventh grade Language Arts teacher at Thomas Jefferson Middle School, was recently named Indiana Academic Coach of the Year – Middle Level Division, by the Indiana Association of School Principals. Strayer was honored at a luncheon during the group’s Coaches Conference held in Indianapolis earlier this month.

Strayer has coached academic teams at TJMS for the past 15 years, serving as Spell Bowl coach and Super Bowl English coach. During the past 10 years, Thomas Jefferson has captured 8 Class 2 Spell Bowl State Championships, including five consecutive championships beginning in 2007. The Super Bowl English squad is the reigning Class 2 State Champion. Class affiliation is determined by school enrollment.

A committee of principals and school personnel reviewed all nominations prior to selecting the Academic Coach of the Year. Strayer was nominated by Paul Knauff, retired principal of Thomas Jefferson Middle School, and Esta Rosario, a longtime Spell Bowl Mom. Even though only 8 students can spell at a contest, the TJMS team averages 24 participants per year, because all students who agree to follow the team expectations may continue to be a part of the team. As one nominator wrote, “The accomplishments of the academic teams Jane coaches are a testimony of her ability to set a goal and lead her students through the necessary steps to be successful.” The luncheon program quoted another nominator’s letter of recommendation, noting that, “Outstanding classrooms and quality extracurricular programs begin with excellent leadership, and Mrs. Strayer provides that leadership to help students achieve at a higher level.”

At a pre-luncheon Spell Bowl Coaching Tips workshop conducted by Strayer and High School Level Finalist Jim Groendyke from New Prairie High School, Strayer was asked to reveal some of her coaching secrets. “I have no secrets,” she replied. “My secret weapons are the parents of the spellers. They are the ones who work behind the scenes, practicing diligently with the students, driving them to practices every morning at 7 AM, and supporting them by attending our competitions. This is a perfect school/parent partnership, and the students are the true winners.”