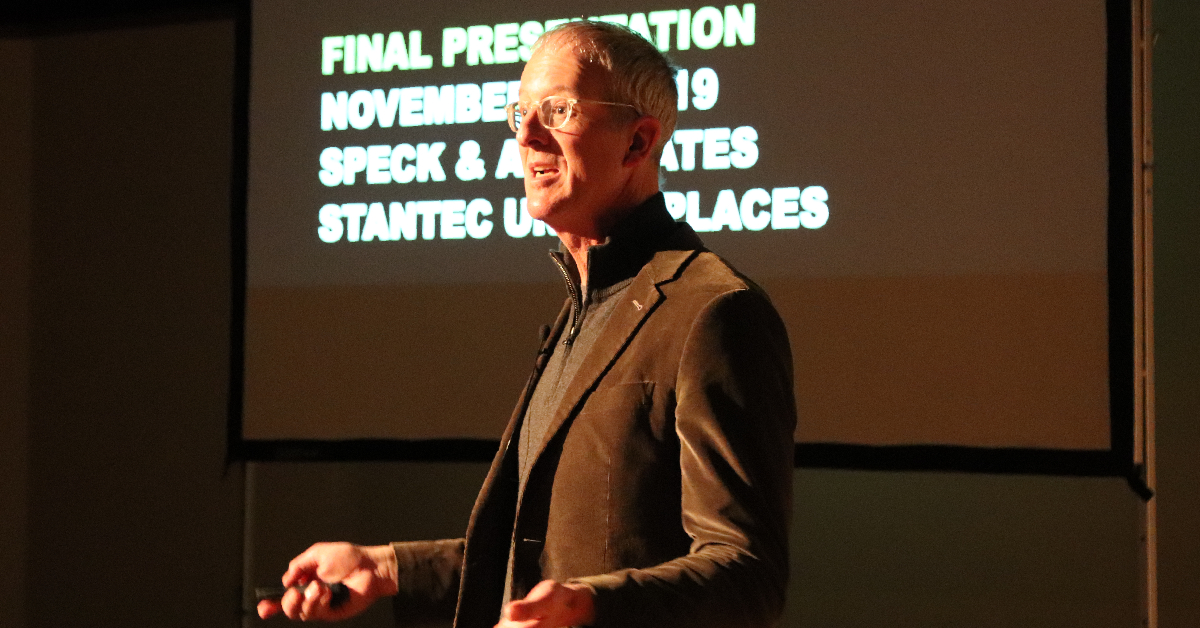 The heart of any great city lies downtown. So stressed Jeff Speck as he unveiled the final master plan for transforming the City of Hammond. Created through the partnership between award-winning private design consultancy Speck & Associates and Stantec Urban Planning & Design, the detailed plan spearheaded by Speck’s expertise provides a strategy to revitalize Hammond and create a sustainable, quality living space.

Many facets encase the plan, which spans over the course of 12-15 years, but the major points of emphasis covered take place in phases one and two. Speck marked the presentation by phases, detailing which transitions would impact each phase.

“The major milestone that’s occurring is the arrival of the train,” Speck said. “We’ve broken down the plan into three phases: before, during and after the train.”

The West Lake Corridor project will have the capability of transporting commuters between southern Hammond/Dyer and Chicago’s Millennium Station in a matter of 40 minutes. While that in and of itself has a broad appeal, the possibilities of infill development surrounding the future train station have an even broader appeal for the City of Hammond. The Hammond Gateway will be aesthetically pleasing to the eye, and the subsequent housing and mercantile buildings will be equally pleasing.

But before the station even exists, Hammond residents can expect a monumental shift within their city. Speck expounded on the three opportunities the plan leverages: the train project, housing demand, and walkability.

All three opportunities are interwoven. The existence of a train station allows for more potential commuters who can live in Hammond while working in The Loop. More affordable housing, specifically space available for rent, will drive youthful communities to live downtown and in the surrounding neighborhoods, like Jacob’s Square. Better integration of street lanes, parking, and buildings leads to walkability, which attracts residents and vice versa.

Speck unpacked the five big investments which would likely impact the city within the next five years:

Speck then simplified the importance of these investments.

“The downtown [area] is the one part of your city that belongs to everybody,” Speck said. “Anyone that’s thinking about relocating to a city, they have an image of that city in mind. If that city’s downtown has a good feel and look, your city has a good image. If it doesn’t, your city doesn’t have a good image.”

Diversifying housing opportunities is one of the major parts of ensuring the plan takes off. According to a localized study performed by Zimmerman/Volk Associates, Inc., the City of Hammond is hungry for more multi-family housing units for rent, especially downtown. Speck described the economic impact as the theory of “time-spread,” whereby people populating the downtown area would extend throughout the daytime and nighttime.

“Once you get 1000 people living in your downtown core, that’s when the good merchants and businesses will come in,” he said.

Anne Anderson, director of economic development for the City of Hammond, said that Speck could not have begun finalizing his plan at a better time.

“The market trend is leaning toward density in urban cores, not in the suburbs,” she said. “That’s why now is the perfect time to revitalize in that direction.”

After a recommendation, Anderson herself attended a two-day seminar led by Speck in Cambridge, MA on the Harvard Univ. campus.

“I was blown away by everything he planned," she said.

Previously, Anderson and the planning and development team traveled to Grand Rapids, MI, along with Pittsburgh and Denver, to study how each city redeveloped their downtown area.

“Grand Rapids is a city we admire,” she said. "For that city, I could actually picture it in the same framework as Hammond.”

Once the City began working with Speck, the master plan fell into place in a miraculous, downhill motion.

“Since Day One with Jeff, it’s never felt like a job,” said Phil Taillon, chief of staff for the City of Hammond. “He is very clearly devoted to and energized by urban planning, and he’s [created] one of the best experiences I’ve had with a consultant.”

One of the ways Speck has elevated his expertise is by involving the cities he’s helping to transform. The master plan itself is partially the result of several workshops with Hammond community members over the past year and a half.

“One thing Jeff has emphasized is people’s memory of Hammond, and how important their experience living in it has been for them,” Anderson said. “He never takes their voices for granted, and how very special their city is to them plays a big role in the way he reimagines it.”

McDermott emphasized the importance of having an expert outsider’s perspective, like Speck’s, for a vision so invested in improving the lives of the people living in a unique city like Hammond.

“[His] train of thought is what we need across the board in Hammond,” McDermott said. “We’re lucky to have Jeff...more people want his services and expertise than he has time. I want to thank him for choosing us as a project that, hopefully, he can write about in his next book.”

The future of Hammond lies in its heart. Read every detail of the master plan to transform Hammond at http://www.gohammond.com/downtown/.