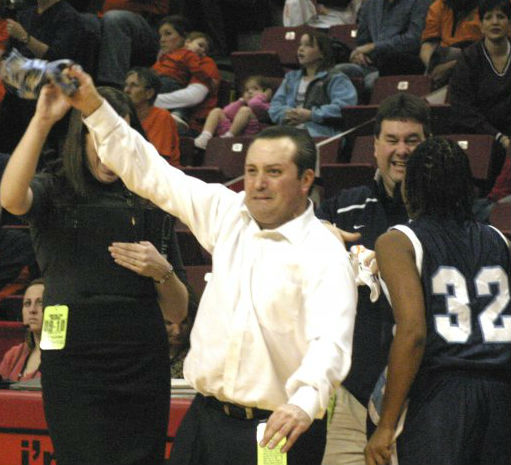 A seasoned high school girls basketball coach who saw a good amount of success on the south side of Chicago is now leading the women’s basketball program at Calumet College of St. Joseph.

John Maniatis assumed the role of head coach of the Crimson Wave on October 29.

“This will be a learning experience for all of us, including myself, as we look forward to this challenge,” said Maniatis, who served as the head coach of the Hillcrest High School girls basketball team for 20 seasons and taught social studies at the school in Country Club Hills, Illinois for 24 years. “Life is all about challenges, and if you are an athlete and a competitor you look forward to climbing that mountain and putting Calumet College in its proper place in being a competitive program.”

Prior to the 64-49 season opening victory over Aquinas College (Mich.) the very day he was announced as head coach, Maniatis had never coached at the college level, or anywhere other than Hillcrest - where he made quite a name for himself and the Hawks’ program, leading the team to a 487-100 record during a tenure that included two state runner-up finishes (2010, 2011), a third place finish (2012), 17 conference championships, 15 regional championships and seven sectional titles. He was recognized as Coach of the Year by the Illinois High School Basketball Association 11 times during that span.

“We had a tremendous run there,” said Maniatis, who added his hopes that his connections over the past two decades at Hillcrest, other schools in the South Suburban Conference and throughout the Southland will help Calumet College recruit prep stars in that region who have either played for or against himself.

“I would hope that that will help pay dividends,” Maniatis said of his proven track record - one that includes assisting 59 Hillcrest players moving on to play NCAA Division I basketball and another 126 who have played in Division II, III or at junior colleges.

“I’ve always wanted to help kids who want to continue to play for the love of the game,” he said. “This opportunity puts me at the other end of the spectrum in helping those continue to use basketball as a vehicle to obtain their dream.”

Maniatis replaces Christina Schmidt, who led the Crimson Wave for 11 years prior to resigning in early October due to family reasons.

“It was a challenging three weeks to find a quality coaching candidate but certain circumstances happen for a reason and we have hired a truly dynamic and accomplished person in John to lead our women’s basketball program this season and beyond,” said Peter Haze Haring, athletic director at Calumet College of St. Joseph.

Maniatis said it was an opportunity he couldn’t pass up.

“NAIA jobs are very difficult to obtain, so when the opportunity presented itself, I thought it was a great fit,” he said. “The interview process went great and the administration here made it an easy decision.”

When hired on October 29, Maniatis didn’t have much time to prepare for his first test as a college coach, but the Crimson Wave still pulled out the victory over Aquinas.

“That was a whirlwind,” Maniatis said of being officially hired in the afternoon and picking up win number one at night. “We knew we needed to come out strong, and we knocked down our shots and came away with a good win.”

“For a person to come into a situation as quickly as John has to, coach the first game of the season with minimal time to prepare and win is a tell-tale sign of many good results to come,” Haring said. “John is the right fit to lead our women’s basketball program and will be a valued staff member for the CCAC athletic department.”

Following a forfeit win over Benedictine University, the Crimson Wave suffered the first setback of the Maniatis-era on November 5 - dropping an 87-54 decision at CCAC rival and NAIA Division II No. 10 Purdue University Calumet.

Now standing at 2-1 on the young season, Maniatis hopes to first establish an identity for the Crimson Wave women’s hoops program.

“I wasn’t too familiar with Coach Schmidt’s style, but I know the nine individuals on this team are working hard and giving their heart and soul,” Maniatis said. “They want to play, and with only having nine on the team - that opportunity will be there.”

Expect the Crimson Wave to be an up tempo team in 2014-15, “pushing the ball up and down on people,” Maniatis said. “With the amount of guards we have, we are going to shoot the ball.”

The Crimson Wave will continue their season at the Georgetown College (Ky.) tournament with a pair of games on November 7 and 8. After a few more traditional road games, the team will return home on December 2 when they are scheduled to host Andrews College (Mich.) for a 5 p.m. tipoff.