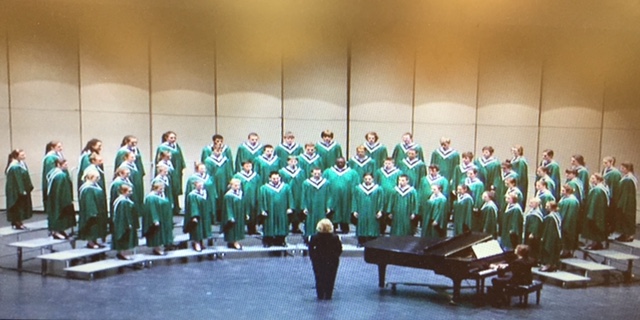 On Saturday, May 9, 2015, the Valparaiso High School Concert Choir walked quickly off the stage after the ISSMA State Finals Competition of 2015. We were on a strict time limit and needed to exit the stage quickly, but that was the last thing on our minds. Looking around at my fellow musicians, I saw tears of joy streaming down faces as soon as their feet left the risers. Our director, Linda Schonbachler, gathered us in a group hug backstage. We had performed the best we had ever performed, and the feeling was indescribable.

But lets back track about three months. Not just any choir is selected to perform at State finals, and it took more than singing for our Concert Choir to make it there. Although the competition takes place on two Saturdays in May, the VHS Choir began preparing in February. To begin, Mrs. Schonbachler picked three songs to perform based off of our skill level and dedication. Every year, she follows a very specific formula. We had our attention getter, “Kalinda”, a sacred, emotional song, “O Magnum Mysterium”, and then we ended with “John the Revelator”, a fierce finale.

After the songs were picked, rehearsals started immediately. These songs are all collegiate level, therefore the average class time was not enough to master the music. The first weeks started with rehearsals every day for each section after school. As each section improved, rehearsals increased to the full group. During the school day, we ran through the songs and found problem spots to fix after school. Our third song included a lot of complicated claps that were easy to speed up. The rehearsals included emotional strain on the musicians. It often got frustrating because if the director found one small error,the entire choir would have to start the section over. However, her perseverance to make us the best we could be is what got us to State Finals in the end.

Our success did not only rely on how our voices sounded, on the score sheet there is an entire category for musicianship. This includes uniformity, emotional connection, and interpretation of the music. As a choir we worked together to engage our faces and move together as a group. Also, there was a part of the competition called Sight Reading, where the choir had to go in a sing music they had never seen before acapella.

Although it took a lot of sweat and sore voices to get us there, every step was worth it when we performed the best we had ever done on the State Finals stage. Nothing brings people together quite like the arts, and I could not be prouder to be the Vice President of a Choir with such dedication and passion for the arts.