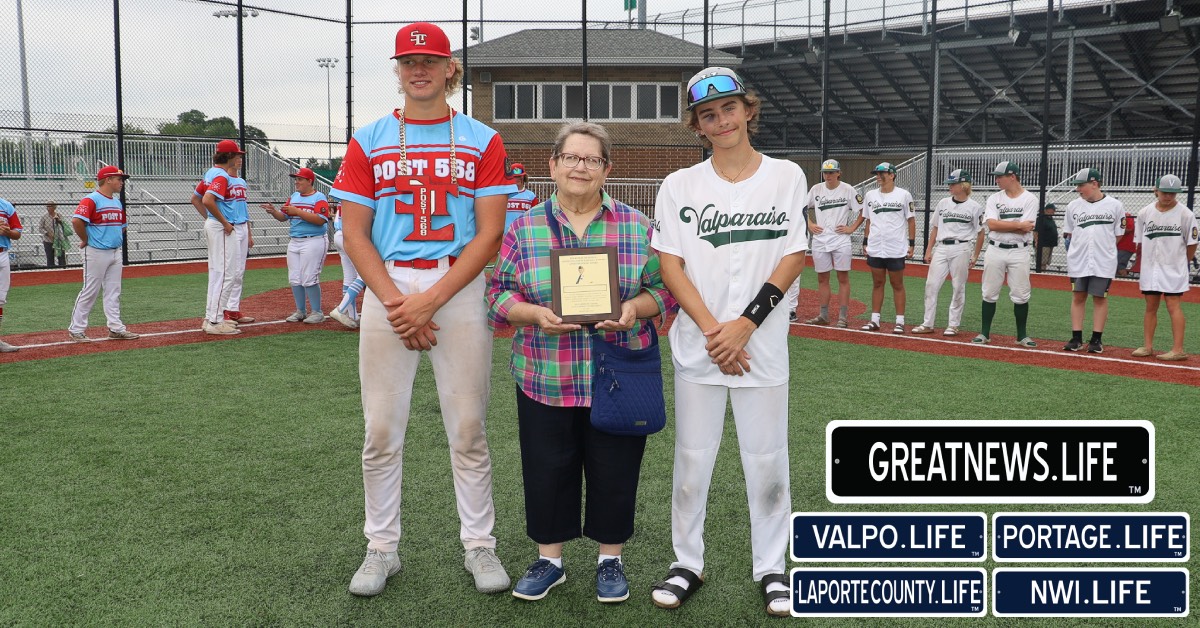 As a demonstration of bringing community, civic engagement, and an ethic of service into focus, players gathered at the Valparaiso High School Baseball Diamond for Sunday afternoon’s 2022 Legion Championship.

Stevensville, Michigan Post 568 edged out Valparaiso Post 94 for the Indiana Juniors Legion State title early Sunday night 5-2 at Valpo High School behind the strong arm of Brody Brewer. The 6’ 5” ace on the bump stimmed the Valpo rounders in the championship game tossing a four hitter. However, neither the rain-soaked weekend nor a second-place finish could take the shine off the event for Valparaiso Head Coach Chad Bush, who felt nothing but a sense of a job well done for his squad and the team of volunteers who made the event a huge success.

“There is a just an authentic sense of tradition with Legion Baseball that you just don’t feel with the traveling system,” said Bush, who had previously been coaching a youth traveling team with his son who now plays for Post 94.

After a brief conversation with Valparaiso High School Baseball Coach Todd Evans who mentioned that when kids came back from COVID they felt displaced from the community and hadn’t played with their teammates in a few years. Both coaches felt there was a real need in Valpo for a local summer baseball program, and to make use of the wonderful new field at Valparaiso High School.

“With the traveling system, playing together with your teammates and for your town meant nothing. We needed to do something and had a new facility that can be accessed all summer long,” said Bush.

Over the course of the four-day tourney, the brand-new state-of-the-art field at Valparaiso High school held up beautifully through the rain. Teams from East Chicago, IN, Danville, IL, Newburgh, IN, Lake Station, IN, and Stevensville, MI played in a round robin pool, grinding through grey skies with the host team from Valpo cruising through early round victories only to meet with a buzz saw in Stevensville’s Ace pitcher Brody Brewer in the championship game.

After the contest both teams shook hands and exchanged pleasantries with a sense of a budding rivalry a foot.

In an era where the rise of traveling sports is a business and traveling baseball had all but washed-out Legion as a viable summer option for young men, Coach Bush and Legion Baseball Director Dan Sherman felt like getting these young men involved in their community is more important than selling players as individual talents to scouts, or products to a travel sports business.

“I really believe this has sparked a nerve in the community, not just Valparaiso, but the baseball community at large, we are bringing back a tradition that has merit. At a time when we as a nation are struggling with civility, the Legion format brings the nostalgia of baseball out, which is a local club, with local kids representing their community,” said Bush.

American Legion Baseball was founded in 1925 between the great wars as a program of service to the youth of America. Team affiliations are associated with local chapters of Legion halls located in all 50 states and Canada and supported by fundraising efforts of Veteran members of these halls. Although traveling teams have become the more popular choice for talented young athletes looking to showcase their skills, this past weekend was nothing but good baseball, great sportsmanship, and even better Chicago Style Hot Dogs from G’s Dogs and More.