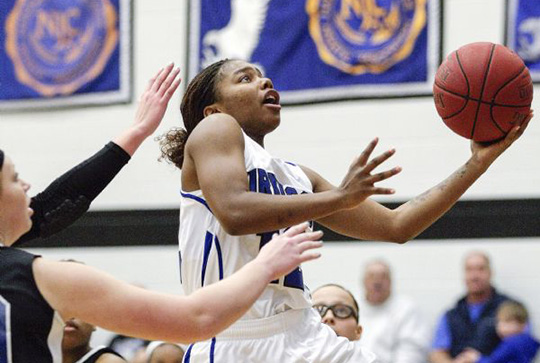 Indiana Northwest Women’s Basketball has announced the addition of Audrianna “A.J” Downs. Downs a 5’5” guard from Merrillville, Ind., joins the RedHawks following two highly successful seasons at Kirkwood Community College (Iowa) where she helped lead the Eagles to a 58-12 record. In Downs’ first season at Kirkwood the Eagles went 31-6 and captured the Region XI Championship and advanced to the 2015 NJCAA National Tournament.

As a prep Downs starred locally at Merrillville High School where she helped lead the Pirates to back to back Indiana Class 4A sectional championships in 2013 and 2014. Downs averaged 11.5 points, 3.0 assists, and 2.4 steals per game en route to NWI Times All-Area and All-Duneland Athletic Conference honors. She ranks third all time in Merrillville program history in assists with 194 and fourth all-time in steals with 187 career thefts.

“A.J. brings even more speed, athleticism and experience to our already talented backcourt. She’s played in many high pressure situations over the course of her high school and college basketball careers and has been on championship teams at every level she has played. A.J. brings the playing making ability that we value in our attacking offense and she has the ability to pressure the basketball the length of the floor as well as her ability to handle the ball for us allows us to keep our best scorers off the ball to preserve their scoring ability. We’re excited to have her with us.” said IUN Head Coach Ryan Shelton.

A.J. intends to major in Business Administration at IU Northwest and will wear No. 10 for the RedHawks beginning this fall.