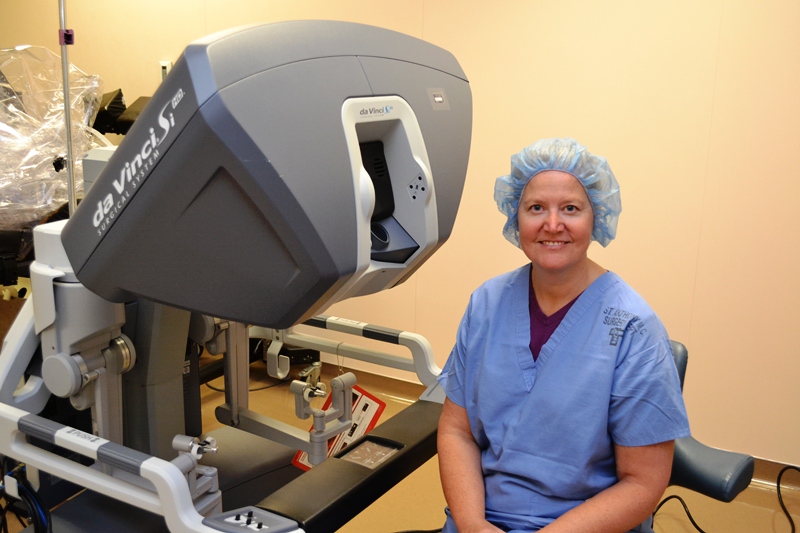 “Instead of using three or four punctures, we use one. There is less pain and also a greater cosmetic satisfaction for patients to have just one,” she said, adding they often are able to go home the same day, instead of three days or more, as was the case before robotics and other minimally invasive procedures became available.

Dr. Hendricks, who has been involved in some 600 da Vinci cases since she began using the robotic platform in February 2010 (she has been in practice 18 years), underwent a stringent training process provided by California-based Intuitive Surgical Inc., da Vinci manufacturer, before she received the latest certification.

Only physicians especially proficient in da Vinci procedures qualify for the advanced training and certification, which she received in May.

And although single-incision has numerous advantages, it is not for everyone, Dr. Hendricks said.

“We have to consider how complex the surgery would be. Women who have had multiple C-sections or abdominal surgeries or have a very large uterus, for instance, often are not good candidates. Still they should see a doctor qualified in this procedure to determine whether they are.”

Dr. Hendricks is a staunch believer in minimally invasive surgery for most patients and believes its technology only has reached “the tip of the iceberg in robotic medicine.”

“There is no question that minimally invasive is the way to go,” she said, adding, “I can only imagine how it will progress in the future.”