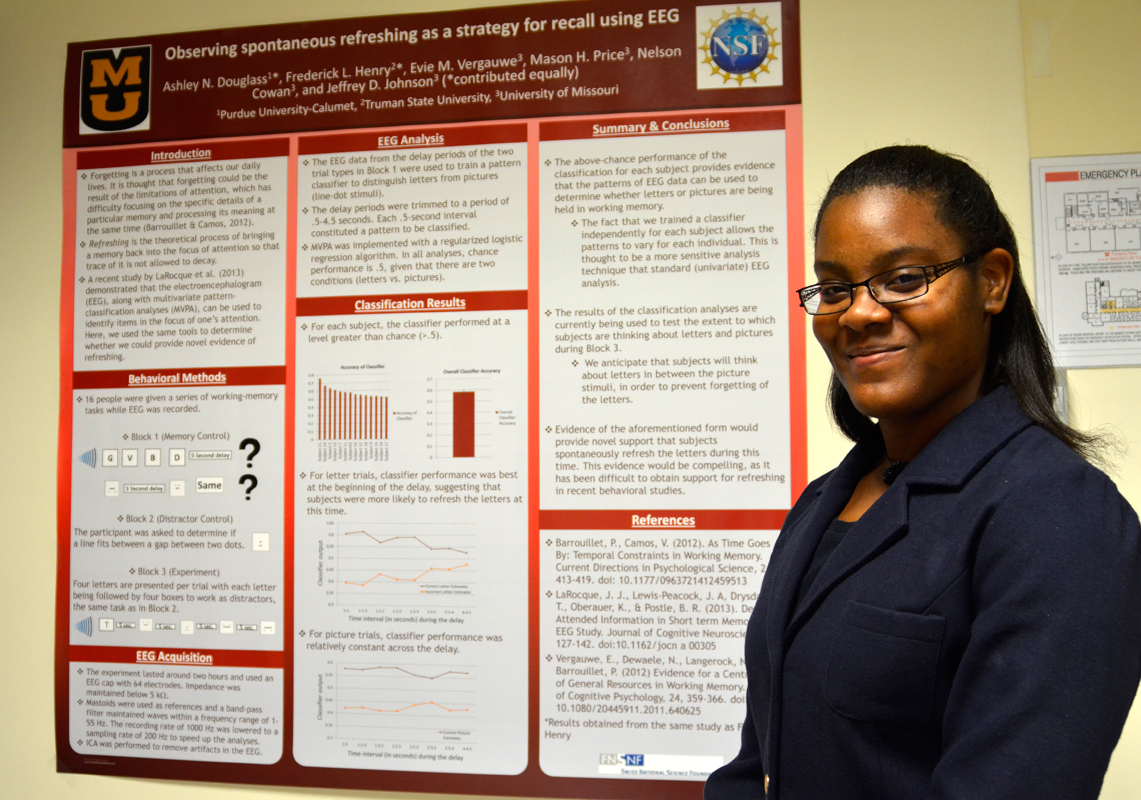 Ashley Douglass said her fascination about the brain began as a child when she realized she could train her dog to do most anything, once she got its attention.

The Purdue University Calumet senior psychology major took her fascination this past summer to the University of Missouri at Columbia, where she participated in the National Science Foundation’s (NSF) Summer Research Experience.

1 of 12 selected
The 23-year-old Hammond native and Merrillville resident was among 12 students selected from 200 applicants for the two-month experience, during which she explored how the human brain remembers different types of information.

Her research involved examining learning and thinking patterns by using an electroencephalography (EEG) machine to record brainwaves of several people.

“It records electrical patterns,” Douglass said of the EEG machine. “The computer finds the patterns in data. We saw a difference in the patterns when (the participants we studied) were thinking about letters and pictures.”

She added that her summer study also might provide better understanding of study habits, as well as why people experience forgetfulness.

“I went through all the majors and slashed out the ones I didn’t want,” she said.

It was during a class taught by Professor of Psychology David Pick that she became interested in studying learning patterns of the brain.

One day in class, she said, Pick showed a video of a person who had cultured cells, connected them to a robot and trained the cells to prevent the robot from bumping into objects.

“The idea of watching learning seemed magical to me,” Douglass said.

She expressed her excitement to Pick, who directed her to Purdue Calumet colleague Feng-Song Wang, associate professor of biology, who had been conducting a similar study with cells.

When Pick and Wang learned that Douglass had applied for the NSF Summer Research Experience, they wrote letters of recommendation on her behalf.

“It’s enormous for her career,” Pick said. “Having that experience will open doors for her.”

From psychology to science fiction
Douglass also has applied her curiosity and motivation about how the brain operates to another interest: writing fiction. Her fervor for writing, she believes, has pushed her to do well in in her psychology study.

“Books, writing, are my motivation,” she said. “When I have an idea, I start writing.”

Since she was a young girl, she said, she has written several science fiction novels, though she’s not sure how many.

“I don’t count them. I just write them and stuff them under my bed,” she said.

She said she is not interested in publishing her work at this time because of the tedious, unsure publishing process.

Yet, one of her books, “The Creatures which History Forgot,” has attracted more than 3,000 downloads on a free book website where she posted it.

She also indicated she would like to write a scholarly book about neuroscience once she earns her Ph.D.

Until then, fueled by fascination, passion and curiosity, Douglass stays busy giving her own brain a workout.