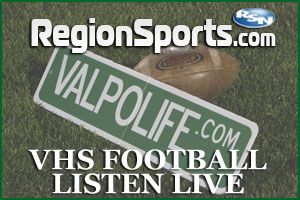 The Valparaiso High School football team will kick off their season on Friday when they face off against their rival Penn Kingsmen, and you can catch all of the action live on ValpoLife.com, courtesy of Region Sports Network!

For those who can’t make it to the game, the Region Sports Network radio broadcast of the game will begin at 6:30 CST, and you can find a link to the game below.

Region Sports Network previewed the game earlier this week, and you can read their full preview here, with an excerpt below:

Many new faces will take the field for the Vikings this year and none more notably than at quarterback. Three-year starter Paul Andrie has graduated, so David Hittinger will be making the first start of his prep career on the road Friday night. In addition to the replacement of Andrie, eight new starters will take the field on the defensive side of the football. The coaching staff remains largely in tact from last season so don’t expect a lot of changes in the executions and game plan out of the Vikes.

Click here to listen live!
Note: This game's broadcast will be streaming on regionsportsradio.com.