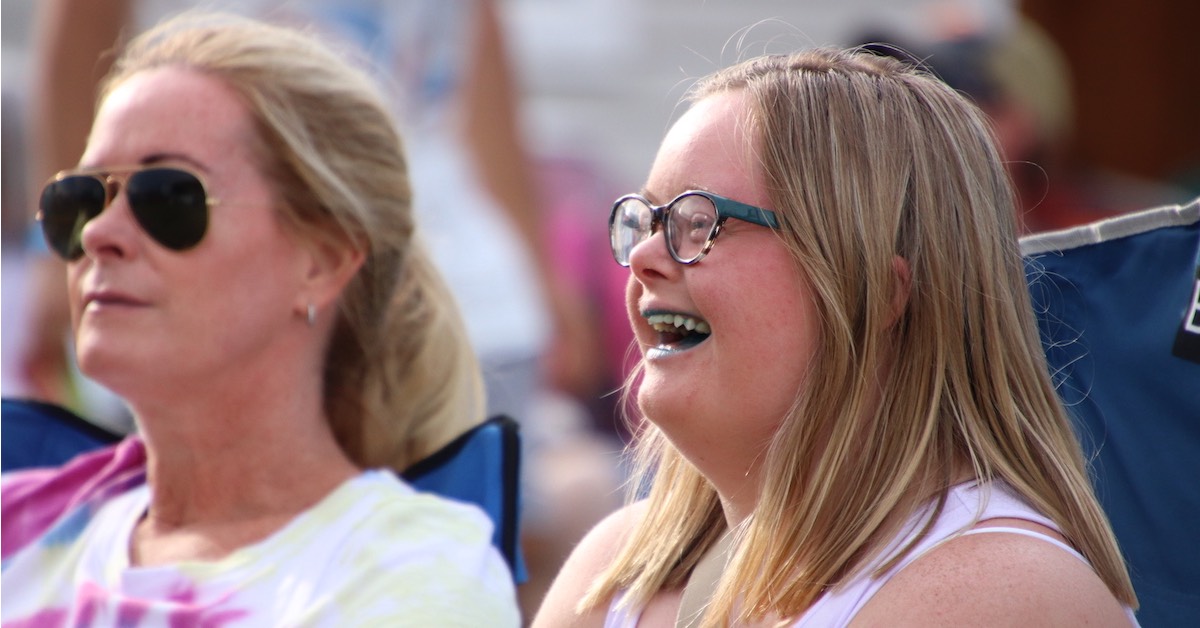 Dozens of Porter County Special Olympics athletes joined Lorrie Woycik on stage Sunday at Zao Island to say, “1-2-3 thank you to all these wonderful people,” as she accepted the $100,000 check at the 9th Annual Livin’ It Up music festival.

“If you think this is easy to put together, you’re wrong,” Woycik said. “We get to enjoy $100,000 all because this handsome man and his wonderful wife knew how much music means to everybody. God bless them.”

She was referring to WVLP’s John King, host of the Livin’ It Up radio show, who started this event 9 years ago with the encouragement of his wife.

“We didn’t know how this was going to work out when we started,” King said. “We’re so thankful to everybody who supports us. It’s a big deal that we’re going over the $100,000 mark.”

The family-friendly event brought great local music to Zao Island for the 5th year in a row.

“There’s so many great things going on at Zao Island,” WVLP’s Co-emcee Mark Maloney said. “We’ve got a full day ahead of us. There’s miniature golf, laser tag, and all this great entertainment.”

“It’s a community event,” King said. “We want everybody to enjoy it – especially our athletes and their families.”

Although King has been encouraged to raise the price from $5, King points out that accessibility is key, and there are plenty of opportunities for the community to support Porter County Special Olympics.

“There are other ways to donate,” King said. “We do two 50/50 raffles, we have the auctions, and you can win some great prizes. Vendors like Lumber Jax are donating a portion of their proceeds from today. You can even just donate if you want.”

King also noted that the price of admission includes a free game of mini-golf, which currently costs around $7, “so you make money when you buy the ticket.”

Yet, the main attraction is the local talent.

Former Special Olympic athlete Daniel Lang opened the day with his performance of the national anthem.

“It’s awesome that I get to do this every year,” Lang said. “I always make sure I call John right away to let him know I want to do it.”

The Chris & Lou band has been playing at Livin’ It Up every year since the inception, joking that they were only 12 when they first played. They were let off their leash a little bit this year, so they only half-played Beatles tunes. They even used the opportunity to experiment with a little Tears for Fears.

Mark Ronger, who ran sound and had been setting up since dawn, hopped on stage at the band’s request to perform a song and engage with the crowd in his usual spry and bouncy way, shaking hands and giving hugs and high-fives.

Chesterton native Jerica Paliga, who had just finished touring with country legend David Allen Coe, was proud to play at her first ever Livin’ It Up.

“I love Zao Island, and I’ve never performed here,” Paliga said. “It’s an awesome event, and I love that I get to play it for my first time here.”

Livin’ It Up is one of the three major fundraisers for Porter County Special Olympics.

“People don’t realize that every county has to raise their own funds,” King said. King is a board member, and like everyone else involved, a volunteer. “We have over 400 athletes, and we’ve got to pay for transportation, hotels, rental space for practice, and all the entry fees for tournaments.”

“It takes about $50,000 for Special Olympics to run on an annual basis for Porter County alone,” said Joe Petrovich, who went to high school with King and was reunited with him through Special Olympics.

Petrovich’s son and former Special Olympics athlete, Andy, has DJ’d Livin’ It Up every year.

“Like the Special Olympics, we wanted to be inclusive,” Petrovich said. “That’s why it’s open to any road-worthy vehicle. We didn’t want to exclude a large part of the population, and a lot of the athlete’s families want to attend, too.”

The roughly 85-mile ride makes several stops at restaurants and taverns that support their cause. The doors open to a light breakfast at 10am; kickstands up and car doors shut at 11, and then they hit the road.

“We hope folks will come out,” Petrovich said. “Even if they skip the ride, they’re welcome to join us for dinner and auctions and dancing to Andy’s tunes afterwards around 5.”

This year was a big year for Livin’ It Up as they finally passed the $100,000 threshold. Each year, the music festival brings in more than $10,000 for Porter County Special Olympics athletes. Join in next year for a day of fun, sun, and live music at Zao Island.If you would like to support the Special Olympics athletes here in Porter County, check out the Road Rally happening on August 17, or visit https://www.porcoso.org/.