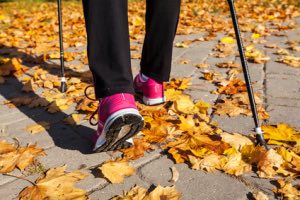 We’ve all heard the song that tells us that ‘the knee bone is connected to the thigh bone’ and on up. But each of these connections is a joint that can become a source of pain. In fact, joint conditions are the most common cause of severe long-term pain and physical disability, according to the World Health Organization.

Joint pain can stop you in your tracks, forcing you to change your routine, look for the elevator, and miss out on the fun.

Yet, Porter’s Center for Orthopedic Medicine can help get you back in action. Read on to learn how one Crown Point man is living large after hip replacement surgery restored his active lifestyle.

Newlyweds Lee and Sally Lugo, of Crown Point, are an active couple.

“That was our attraction to each other,” explained Sally. “In the beginning it was golf. Next thing you know we’re biking,” she said. Lee also enjoyed running, and Sally cheered him on at marathons and local races. So when Lee began to experience pain after a race, it affected them both.

“I thought it was back pain,” said Lee. Lee, who had been running up to 50 miles per week, was suddenly parking near the shopping carts at the grocery store so he had something to lean on. Not one to sit out, Lee saw his family doctor who suspected the pain was originating from his hip.

The Lugos then turned to specialists in Ohio, Florida, and Illinois. “We were running all over the place getting more opinions and out-of-state doctors were encouraging us to schedule back surgery,” said Sally.

Frustrated, the Lugos returned to Lee’s family doctor for pain medication as they pondered their options. The doctor reiterated his suspicion about the hip and recommended they see Orthopedic Surgeon Nick Nenadovich, M.D. “Dr. Nenadovich did an immediate CAT scan and quickly shared the results. He pointed to Lee’s hip and said 'This is your problem,’” said Sally.

From there they met David Musgrave, M.D., an orthopedic surgeon who specializes in hips. “Dr. Musgrave told us our options. He explained that hip surgery isn’t like heart surgery, which might be necessary to save your life. Hip surgery is a lifestyle decision,” said Lee.

Lee didn’t want to spend any more time on the sidelines, but he also wanted to make the right choice for lasting success. The Lugos did their research, checking and comparing the credentials of all of the doctors and facilities they’d considered. “Not only did Dr. Musgrave receive consistently high praise, but Porter scored the best of all the facilities, too. We learned that one of the leading causes of complication in hip replacement surgery is rejection, caused by infection. Porter Regional Hospital had one of the best scores, because they have a very low infection rate,” shared Lee.

Click here to read the rest of this article!