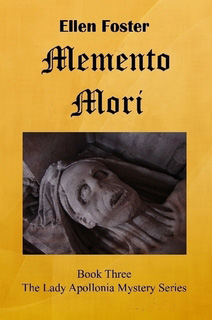 Local author, Ellen Foster will introduce her new book, Memento Mori, on Thursday evening, November 8, at 7:00 PM at St. Andrew’s Episcopal Church, 505 Bullseye Lake Road, Valparaiso. The free program will include a digital lecture describing 14th century Gloucester and the English West Country along the banks of the Severn River where the novel is set.

Memento Mori is the Latin phrase meaning: “Remember you must die.” English life in the 14th century was menaced repeatedly by the reoccurrence of bubonic plague, but the human threat to life in medieval cities included 14th century gangland crime often protected by the power of the upper class.

A Foster lecture on medieval England is the closest thing to time travel to Medieval England that you will ever experience. Come for an hour of rubbing shoulders with Momento Mori characters from the era of Chaucer. All of the books in the series will be available for signing by the author after the program.