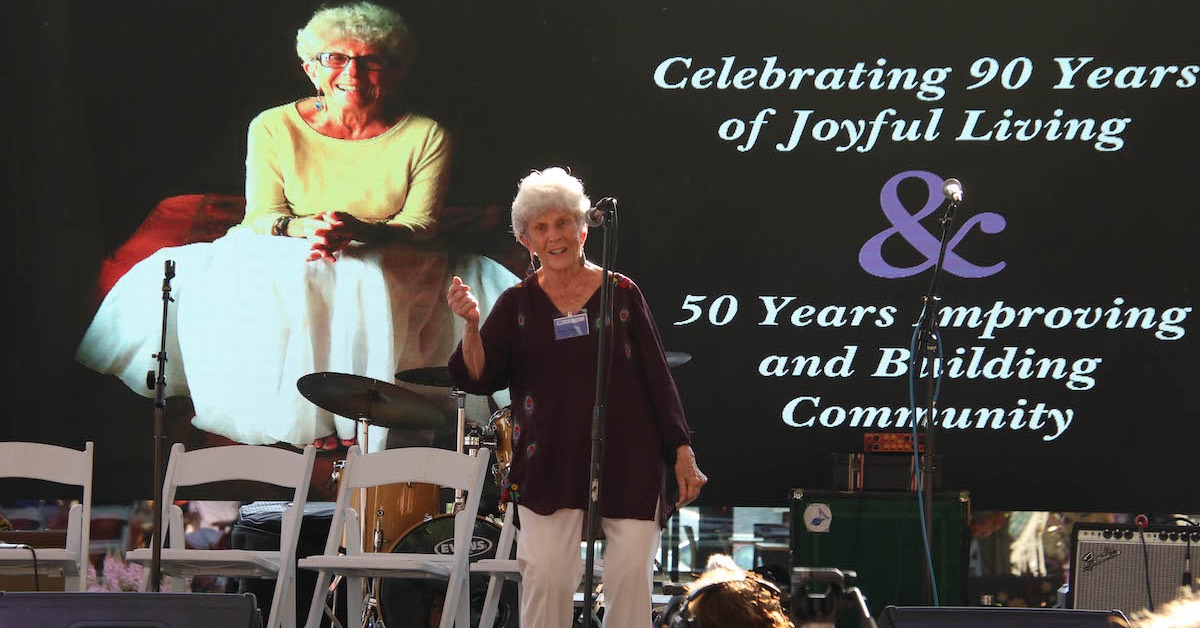 Lois “Loie” Reiner, Co-Founder of Project Neighbors and all-around matriarch of Porter County, has done all of the above.

"My motto is 'Show up. Make change. Have fun,'" Reiner said.

To honor her achievements, friends and family from around the Region and the country gathered at the William E. Urschel Pavilion in downtown Valpo on Saturday evening for a party aptly-named ‘Loie-Palooza’.

"She has done it with absolute grace and beauty," said Christopher Pupillo, Programming and Technical Director for the event. "She's an amazing woman, tireless in her effort to help make this a more welcoming community."

Pupillo has gotten to know the Reiner clan well through his service on the Project Neighbors board and other projects.

"I'm honored to be volunteering,” he said. "They make you feel like part of the family."

Ostensibly held as a fundraiser for upcoming Project Neighbors housing and development projects, the party celebrated both Reiner’s 90th birthday and the non-for-profit’s 50th anniversary.

"It's a great organization,” said Susannah Larson, Event Organizer and granddaughter of the honoree. "They don’t just build houses. They really build community. They build ideas.”

Growing up, Larson helped out doing odd jobs at building sites and taught piano lessons at Hilltop Neighborhood House. She welcomed the opportunity to contribute again now that she’s returned to the region.

"It's very fun, exhilarating, and humbling to be able to be a part of it," Larson said.

Loie-Palooza volunteer Claudia Delgado shared Larson’s and Pupillo’s sentiments. She recently relocated to Valparaiso from Chicago and for her, the move was a dream come true.

"I'm here because Project Neighbors helped me a lot,” Delgado said. “I love Loie so much. I feel like a family member."

Attendees recorded memories of Reiner and Project Neighbors for the StoryCorps project, posted notes of thanks and cheer on a signboard, and swapped stories with each other over dinner and cake.

"After 50 years, you get to stand back and kind of look at the shape of the forest,” said Paul Schreiner, Executive Director of Project Neighbors. “That reflection has been informative, and it feels good."

Schreiner started working with the nonprofit 28 years ago, after being inspired by co-founder Walt Reiner, Lois’ husband. Walt, who passed away in 2006, believed that we need to all pull together and take care of each other.

“That message resonated with me,” Schreiner said.

As Executive Director, one of Schreiner’s duties is to plan future projects. He was particularly excited about developing low-income, mini-housing units for men to complement the organization's existing living spaces for women.

That building, now known as “Neighbors Place— A Residence for Women,” was originally constructed to house an expanded community clinic. To Loie Reiner, breaking ground on that project was a defining moment for Project Neighbors.

"That was like a whole new turn for us,” Reiner said. “We had been into housing exclusively, and then we got into childcare with a little clinic in the back. Then we got the bigger clinic."

The clinic, now called HealthLinc, outgrew the space and expanded into new construction on Sturdy Road, then eventually into 12 more locations across the Region.

Other projects attributed to Project Neighbors over the years include, but are not limited to— WVLP 103.1 Community Radio, New Vistas High School, The City of Valparaiso’s Advisory Human Relations Council, and beloved former Valparaiso restaurant Maria Elena’s.

Reiner was deeply moved by the outpouring of love she received at the party bearing her name.

"It's beyond description,” she said. “It's incredible. It's just very, very happy."

To those gathered in honor of the legacy she and her husband started half a century ago, her advice was simple and direct.

"When somebody asks for help, say yes,” Reiner said. “One thing leads to another.

Donation options to Loie-Palooza’s fundraising efforts and other information about the event can be found at loie-palooza.org. Project Neighbors is always ready to welcome new volunteers for current and future projects. To find out how you can contribute, please visit projectneighbors.org/.