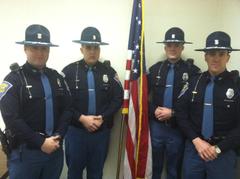 Four new troopers reported to the Lowell District, this morning, to begin their new careers as Indiana State Troopers. They were among 42 graduates of the 74th Indiana State Police Academy, which graduated December 23.

Their recent graduation was the culmination of 23 weeks of intense training totaling over 900 hours. Some subject areas of training included criminal and traffic law, crash investigations, emergency vehicle operations, defensive tactics, firearms and a host of other subjects related to modern policing.

Trooper Curtis Jones, 33, is a native of Westville and a graduate of Westville High School. He attended Ball State University where he received a Bachelor’s Degree in Criminal Justice. He worked as a correctional officer in Henry County before joining the state police. Jones resides in LaPorte with his family.

Trooper Andrew Rasala Junior, 25, is a native of Kouts and a graduate of Kouts High School. He attended Ivy Tech where he studied Criminal Justice. He worked as a jail officer for Porter County Sheriff’s Department before joining the state police. Rasala resides in Porter County.

Trooper Brant Goubeaux, 25, is a native of Highland and a graduate of Calumet Baptist High School in Griffith. He attended Indiana Wesleyan College where he received a Bachelor’s Degree in Business. He worked as an evening manager at the university before joining the state police. Goubeaux resides in Lake County.

Trooper Jason Pratt, 35, is a native of Portage and a graduate of Portage High School. He attended Moody Bible Institute in Chicago where he received a Bachelor’s Degree in Mission Aviation Technology. He worked as a jail officer at the Porter County Sheriff’s Department before joining the state police. Pratt resides in Porter County with his family.

All four new troopers will start their 14 weeks of field training today with experienced troopers. The program allows them to put the skills and knowledge they gained in the academy to work in the field. Upon successful completion of the field training program, they will receive their own patrol car and begin solo patrol responsibilities.