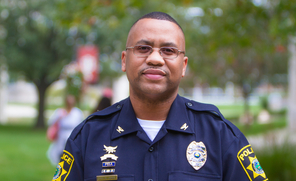 James will be responsible for 14 sworn officers, as well as a team of personnel including several dispatchers. As head of the IU Northwest Police Department, James will provide leadership, direction and oversight for all campus enforcement functions. He will serve on various university, local and state law enforcement committees and act as liaison between the campus department and local municipal agencies and courts, while continuing to build partnerships with other jurisdictions.

James will also plan for and train his staff to respond to major campus crisis events and incidents through his role on the campus’s crisis management team.

James, who has been serving as interim chief, has been lauded for his law enforcement experience, community involvement and effective relationships with surrounding law enforcement organizations.

“Chief James’ relationships with local law enforcement and federal agencies, as well as the dedication of our well-trained, experienced officers, have made our campus one of the safest in Indiana,” said Chancellor Lowe. “We look forward to his continued leadership to enhance the safety and security of the IU Northwest campus, as well as the surrounding community.”

In his nearly 13 years working in law enforcement, James has served in various capacities, including patrol officer, patrol sergeant, detective and detective sergeant, corporal, operations and executive lieutenant, SWAT officer and, most recently, interim chief. For a short period, he served as IUPD chief at IU Kokomo.

As a native of Gary, Ind., James has great experience and interest in community policing, employing best practices on the IU Northwest campus. He serves as the current President of the Northwest Indiana Chapter of the National Organization of Black Law Enforcement Executives (NOBLE).

“I look forward to continuing to serve the campus and the City of Gary, as well as collaborating with local agencies to provide a safe and secure learning environment,” said James. “My fellow officers and I remain committed to making IU Northwest the safest campus in Indiana.”

James earned a bachelor’s degree in Public Safety Management from Calumet College of Saint Joseph and is a graduate of both the Northwestern University Police Staff and Command School and the Police Executive Leadership Academy. He is a certified Indiana law enforcement instructor specializing in community engagement, active shooter, building entries and general instruction.

Throughout his career, James has received several awards, commendations, and recognitions for excellence. In July of 2012, he received a Medal of Valor as well as a commendation award for a SWAT call. He has received numerous other awards for officer of the year and drug investigations during his previous roles before coming to the Northwest campus.

The campus is currently planning an official swearing-in ceremony for James in April. Details are forthcoming.