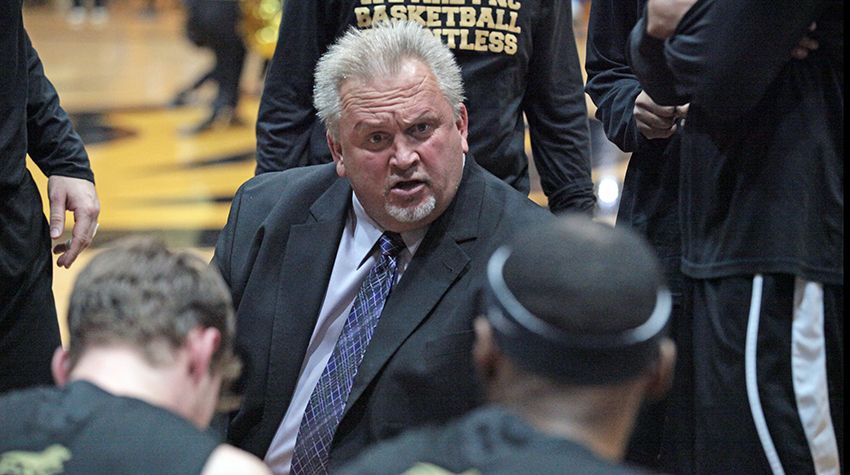 “On behalf of the Purdue Northwest Pride, I am pleased to appoint Matt Bush as our head men’s basketball coach,” Costello said. “Coach Bush brings a tremendous amount of experience, success, and knowledge to PNW after doing an outstanding job building the Purdue North Central program.

“I look forward to him developing a PNW basketball program that will bring spirit and pride to Northwest Indiana.”

Purdue Northwest Associate Athletic Director for Compliance-Designate Tom Albano, who has overseen Bush’s progress over the past three seasons, added his approval.

“We look forward to Coach Bush taking our basketball program to the next level and beyond as Purdue Northwest,” he said. “He guided the PNC program to a steady progression during each of the seasons he was at the helm. His strong experience, recruitment, knowledge and teaching of the game will serve our team of PNW student-athletes well.”

Bush completed his third full season as Head Coach at Purdue North Central in 2015-16, during which he led the program to new heights. The Panthers tied the school record with 15 victories, including a win over Indiana University South Bend, a team that eventually made a run to the CCAC Tournament Championship game, and perennial CCAC power Cardinal Stritch. Junior guard Mike Martin was named to the all-CCAC Second Team under Bush’s tutelage, averaging 18.0 points per game, which ranked fourth in the league. PNC also opened the campaign on a high note, as the Panthers captured the Moody Bible “Big Four” Tournament title and Martin was named Tournament MVP.

More importantly, Bush has instrumented a progression of growth and improvement within the Purdue North Central basketball program, taking over a team that had won just 24 games over a five-year span to a win total of 34 in just three seasons. Now the all-time PNC win leader with 39, Bush began his tenure midway through 2012-13, capturing his first career win in his first game a the helm, 74-70 over Holy Cross College.

In 2013-14, the team pushed its victory total to nine, including conference wins over Roosevelt, Trinity International and Judson. In 2014-15, the Panthers reached double digits with 10 victories. That season included a 61-56 victory at Purdue Calumet in the team’s final regular-season contest, and junior forward Clarence Heath was named an all-CCAC honorable mention.

Bush carries nearly 30 years of basketball coaching experience with 24 of those years at the helm of the Morgan Township (Ind.) High School boys’ basketball team. Bush led the Cherokees to 18 championships, including six sectional titles, the school’s lone regional crown in 1998-99 and three elite eight appearances in the IHSAA Class A State Tournament. He also spent two seasons as head coach at Cement High School (Okla.), where he won a sectional and regional championship. In all, Bush has recorded more than 300 prep victories.

“We hope to bring an exciting, winning brand of basketball to the Northwest Indiana region and we’re excited to get started in the very near future.”

A graduate of Southwestern Oklahoma State University, Bush played collegiate basketball and later served as a graduate assistant for the Bulldogs, earning a bachelor’s degree in physical education. A longtime resident of Northwest Indiana, Bush is a graduate of New Prairie High School in New Carlisle, Ind.