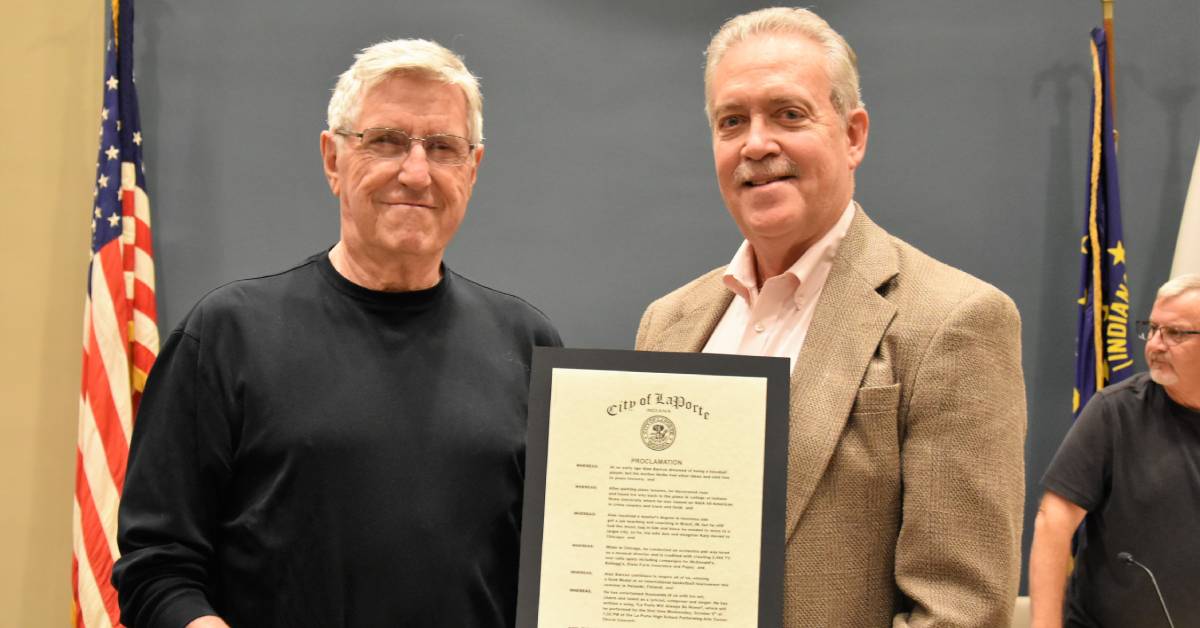 It was a time for honor and celebration at the La Porte City Council meeting when Mayor Mark Krentz proclaimed October 9, 2019 as Alan Barcus Day.

Barcus, a talented as a lyricist, composer, and singer, was honored for a song he wrote for the city of La Porte titled, La Porte Will Always Be Home. The song is written with fondness for La Porte, a fondness that many residents share and hold close, no matter where they travel.

Music was not Barcus’ first love. At an early age, he dreamed of being a baseball player, but his mother Nellie had other ideas and sent him to piano lessons. He would quit piano for a time and play cello reluctantly before discovering a love for jazz instead.

"I felt that the girls didn't come to the orchestra concerts—they came to the jazz band concerts,” Barcus quipped. “I thought I would play the trumpet and I really liked that for a while but I wasn't planning on getting into music. It was by accident. I never took a course."

Alan attended college at Indiana State University where he was named a National Association of Intercollegiate Athletics (NAIA) All-American in cross country and track and field and received his master’s degree in business. Barcus discovered playing the piano before meets would calm his freshman pre-race nerves.

"The music building was open all night, and I would go down to the practice rooms and play what I remembered. And then, all of a sudden, I had forgotten how nervous I was,” Barcus said, “so I started doing that before all the meets.”

Barcus went on to a career teaching and coaching in Brazil, IN. With music becoming more and more important to him, he knew he needed to move to a larger city. He, his wife Ann, and daughter Katy decided to move to Chicago .

"I remember when I called my mother and told her we were moving to Chicago to get into music,” he said. “Her goal in life was for me to play the piano, yet her first words when I told her was 'Oh no! But you have tenure!"

In Chicago, Barcus conducted an orchestra before being hired as a musical director creating 2,498 TV and radio spots including campaigns for McDonald’s, Kellogg’s, State Farm Insurance, and Pepsi.

Mayor Mark Krentz and his wife, Laura, had been fans of Barcus for many years. While driving back after hearing him play at the Acorn Theater in Three Oaks, MI in 2017, Krentz discussed with Laura his idea to ask Barcus to write a song about the city.

When Barcus set to work on the song, he said it did not take long for the music to flow.

"It writes itself when you get going. When I first sat down it took maybe thirty minutes but then I started tinkering with it, adding the piano parts and the lyrics to the song itself," he said.

Music speaks when words fail, and for Krentz and Laura, Barcus’ music spoke like no other.

"When we went down and heard Alan play it the first time, we were moved to tears,” Laura said. “He is an incredible storyteller, and being able to tell the story through just the right notes and words that nailed it, it was so incredible."

"Alan's songs are words of truth, and I think that's why everyone loves his music," Ann Barcus said. Her favorite song of his is Last of the Cowboys.

As if his musical accomplishments were not enough, last summer Barcus and teammates won the Gold Medal at an international basketball tournament in Helsinki, Finland.

"Alan Barcus continues to be an inspiration to us all," Krentz said.

La Porte Will Always Be Home will be performed for the first time on Wednesday, October 9 at 7:30 p.m. at the La Porte High School Performing Arts Center Choral Concert by a combined chorus of 260 voices.