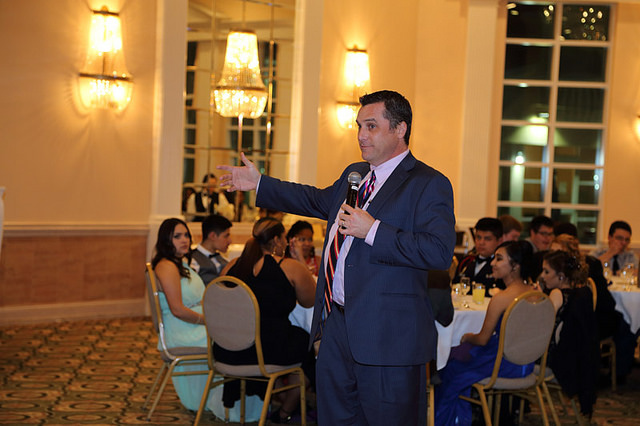 Hammond Mayor Thomas M. McDermott, Jr. spoke on his military experience and how it has shaped his life at the Wildcat Battalion Second Annual Military Ball on Saturday, February 27, 2016 at the Dynasty Banquet Center in Hammond. Mayor McDermott was invited to be the guest speaker by Cadet Lieutenant Colonel Williams of the Hammond High Junior Reserve Officer's Training Corps (JROTC). "Your visits with us here at Hammond high have been a topic of discussion among cadets," stated Cadet LTC Williams. "I know they would be thrilled to have you as a guest speaker."

Sergeant First Class (retired) Michael R. Jones is the Army instructor for JROTC at Hammond High School. As leader of the JROTC, Sgt. Jones teaches lifetime disciplinary skills to students that will benefit those who decide to enter the military or other occupations. JROTC cadets are encouraged to volunteer their time to the community. The City of Hammond has been a recipient of their volunteerism at Hammond's Black History Month Program, Mayor's Prayer Breakfast, Volunteer Breakfast and Veterans Day Parade where the cadets Posted Colors at these events.

"As a military veteran myself, I see nothing but positives coming out of Hammond High's (Wildcat Battalion) JROTC Program," stated Mayor McDermott. "These young men and women are learning discipline, teamwork and military philosophies. It's a great program, only in its 3rd year of operations, and I only see good things coming from it in the future."