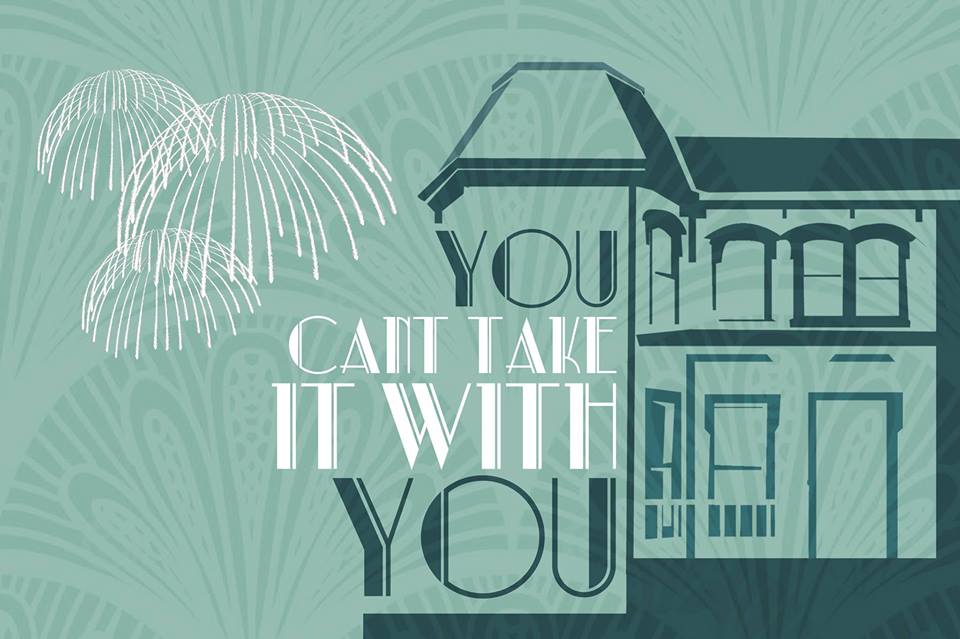 Casting Call! You Can't Take It With You
At first, the Sycamores seem mad, but it is not long before we realize that if they are mad, the rest of the world is madder. Tony, attractive young son of the Kirbys, falls in love with Alice Sycamore and brings his parents to dine at the Sycamore home on a wrong evening. The shock sustained by the Kirbys, who are invited to eat cheap food, shows Alice that marriage with Tony is out of the question. Meantime, Tony, who knows the Sycamores are right and his own people wrong, will not give her up. No mention has as yet been made of the strange activities of certain members of the household engaged in the manufacture of fireworks; nor of the printing press set up in the parlor; nor of Grandpa's interview with the tax collector when he tells him he doesn't believe in the income tax.

Casting Needs:
We are seeking 7 Women and 9 Men to fill out the cast. Actors should be prepared for cold readings for the following characters:

Penelope Sycamore (Early to Mid 50s): Usually goes by Penny. Mother of Essie and Alice, wife of Paul and daughter of Martin. A loving and caring mother and wife, Penny is as eccentric as the other members of her family. Penny was an enthusiastic painter but gave up this hobby for writing when a typewriter was delivered to the house by mistake eight years earlier. Charmingly blunt, she causes some embarrassment during the Kirby's visit, first by calling Mrs. Kirby's beloved spiritualism "a fake" and then by proposing a word association game and asking what everyone associates with the words "sex", "bathroom," and "lust." Penny's enjoyment of life and direct speech are in marked contrast to Mrs. Kirby's seeming discontent and reserved acceptance of social conventions.

Essie Carmichael (Mid 20s - early 30s): Wife of Ed, daughter of Penny and Paul, Grandaughter of Martin, sister of Alice. She is childish. As a hobby, she makes candy that Ed sells. Essie dreams of being a ballerina. She has spent eight years studying with Boris Kolenkhov but is a terrible dancer. She dances her way through the play, improvising her steps to her husband Ed's xylophone music. Like the other Sycamores, Eddie is both happily absorbed in tasks which amuse her and wholly undisturbed by the eccentricities of her family.

Rheba (Ageless): The maid and cook to the Sycamore family. She is treated almost like a part of the family. She is dating Donald. In the words of Mrs. Sycamore "The two of them are really cute together."

Alice Sycamore (Early to Mid 20s): Alice is Penny and Paul's attractive younger daughter. The twenty-two-year-old Alice has, according to the stage directions "escaped the tinge of mild insanity" the pervades her relatives, but her "devotion and love for them are plainly apparent." She falls in love with Tony Kirby. She works for Kirby and Company and is rather embarrassed by the eccentricities of her family when she has Tony and his parents at her house.

Gay Wellington (most likely played over 40): Described in the stage directions as "an actress, nymphomaniac, and a terrible souse," comes to the Sycamore house to discuss a script with Penny but then passes out on the couch. She occasionally awakens, usually just in time to contribute to the chaos that erupts following the Kirby's unexpected visit.

Miriam Kirby (Mid 50s - Early 60s): Wife of Mr. Kirby, mother of Tony. She is an extremely prim and proper woman the conservative female equivalent of her businessman husband. She, too, is shocked by the unconventional Vanderhof-Sycamores, Her hobby is spiritualism and she is affronted when Penny says it is "a fake". She seems to reveal she is dissatisfied with her marriage when in a word game she associates "honeymoon" with "dull" and almost admits that Mr. Kirby talks about Wall Street even during sex.

The Grand Duchess Olga Katrina (Mid 40s - Mid 50s): She was one of the Grand Duchesses of Russia before the Revolution. Since then she has been forced to flee to America where she has found work as a waitress in Childs' Restaurant. The rest of her family has had a similar fate, such as her Uncle Sergei, The Grand Duke, who is now an elevator man. She loves to cook

Grandpa - Martin Vanderhof (Early - Mid 70s): Father of Penny, Grandfather to Alice and Essie. Head of the Household. He is an eccentric but wise and happy older man who has never paid his income tax because he doesn't believe in it, as he feels that the government wouldn't know what to do with the money if he paid. One day thirty-five years ago he gave up his successful business career, since, as he explains to Mr. Kohlenkhov, it struck him that he "wasn't having any fun," so he "just relaxed" and has "been a happy man ever since." He now has "time enough for everything" and, as he tells Mr. Kirby, he no longer has "six hours of things I have to do every day before I get one hour to do what I like in." He goes to circuses, commencements, throws darts and collects stamps. He provides the philosophical center of the play, explaining the folly of seeking material wealth at the expense of personal fulfillment, and asking only, as he says while saying grace before dinner, that their family be allowed "to go along and be happy in their own sort of way."

Paul Sycamore (Late 50s - Early 60s): Father of Essie and Alice, husband of Penny, Son-in-law of Martin. He is a tinkerer who makes fireworks in the basement with the help of his assistant Mr. De Pinna. Quiet, charming and mild-mannered, he never loses his composure, even when the fireworks he makes in the basement unexpectedly explode. Like his wife and father-in-law, Paul possesses what the stage directions call "a kind and youthful air."

Mr. De Pinna (Middle Aged): Described in the stage directions as a "bald-headed little man with a serious manner," the middle-aged Mr. De Pinna arrived at the Vanderhof residence eight years ago to deliver ice and ended up moving in. He shows how open and accepting the Vanderhof-Sycamore family can be: everyone is obviously welcome in this house. Mr. De Pinna has clearly taken to this family's way of life. He helps Paul make firecrackers, poses in Roman costume for Penny's painting of a discus thrower, and remains undisturbed by the chaotic household.

Ed Carmichael (Early - Mid 30s): Stage directions describe him as "a nondescript young man" in his thirties. Loyal and devoted husband of Essie. He is a xylophone player and distributes Essie's candies. Ed is an amateur printer who prints anything that sounds good to him such as some of the writings of the revolutionary Russian Communist Leon Trotsky: "God Is the State; the State Is God." He also prints up dinner menus for his family. He is mistakenly a person of interest to the FBI who fancies him an insurrectionist attempting to undermine the United States Government.

Donald (Ageless): Boyfriend to Rheba, who serves as volunteer handyman and errand runner for the Sycamores. He is on welfare.

Wilbur C. Henderson (40 - 60): An employee of the IRS, he comes to collect the tax money owed by Grandpa; and can't understand why the latter won't pay income tax.

Tony Kirby (Mid - Late 20s): The stage directions tell us he is a "very nice young man" who has recently attended Yale and Cambridge. He has fallen in love with Alice Sycamore and wants to marry her. Tony is a Vice President or Kirby & Co., his father's business. He purposely brings his parents to the Vanderhof-Sycamore house on a wrong night, because, as he says to his father, "I wanted you to see a real family as the really were. A family that loved and understood each other." Determined to do something that he wants to do, Tony rejects his father's business and embraces the Vanderhof philosophy of seeking happiness over wealth.

Boris Kolenkhov (Mid 40s - Mid 50s): A Russian who escaped to America shortly before the Russian Revolution. He is very concerned with world politics, and the deterioration of his homeland. He is the ballet instructor of Essie, aware that she is untalented at dancing, and ever the opportunist, he keeps working with her, conveniently, at meal times. He is opinionated and often loudly declares that something "stinks"! He has a wrestling match with Mr. Kirby.

Anthony P. Kirby (Mid 50s - Early 60s): Husband of Mrs. Kirby, father of Tony. He is a very proper man who is president of Kirby & Co., a successful Wall Street businessman, and secretly despises his job. He is a traditional authority figure who represents the conventional worldview the Vanderhof-Sycamores reject. Conservative and repressed, he has perpetual indigestion and tells his wife he thinks "lust is not a human emotion." He is initially shocked by Alice's family and says Grandpa Vanderhof's idea of doing only what makes you happy is "a very dangerous philosophy...it's un-American." His hobby is raising expensive orchids. He is also a member of the Harvard Society, the Union Club, the National Geographic Society, and the Racquet Club. He lives life "the right way" and is miserable for it. He undergoes the most major transformation in the play.