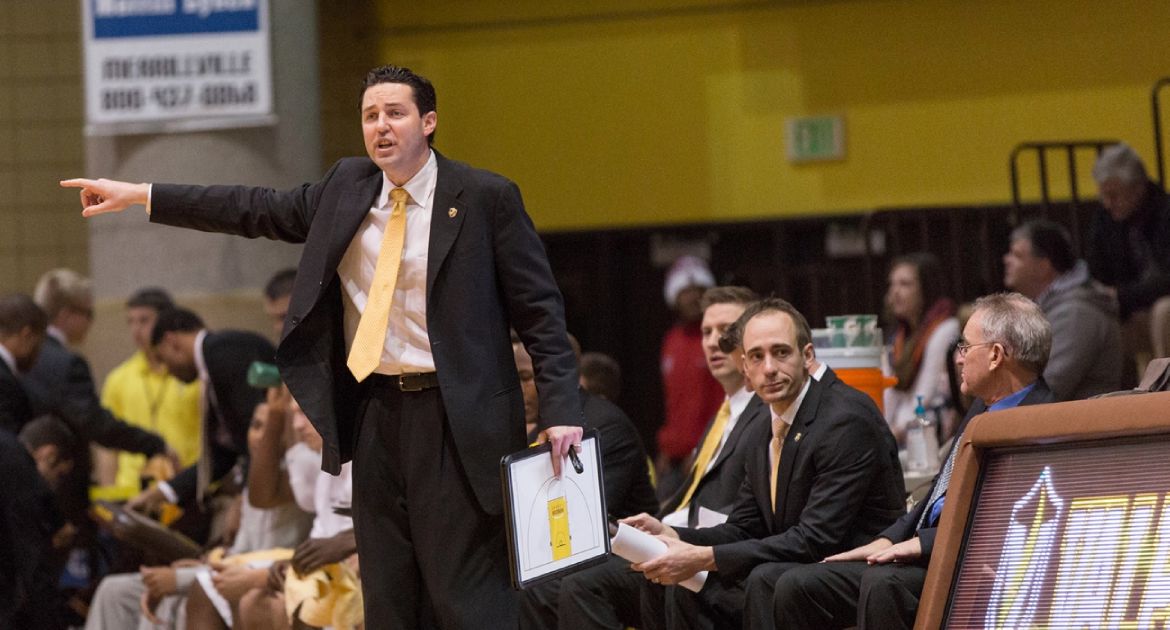 Next Up in Crusader Basketball: The Valparaiso men’s basketball team continues a stretch of three consecutive road games Tuesday night at Youngstown State. The Crusaders enter having won each of their last four games and are looking for their third winning streak of at least five games this season.

Last Time Out: Valparaiso opened its three-game road swing with a big win Saturday evening at Wright State, scoring nine consecutive points late in the second half to open up a 10-point lead en route to a 66-56 win over the Raiders. Vashil Fernandez led the way for the Crusaders with 14 points and nine rebounds, while three other players joined him in double figures in the scoring column.

Head Coach Bryce Drew: Bryce Drew (83-39) is in his fourth season at the helm of the Crusader men's basketball program in 2014-15. In his first three years, Drew led Valpo to 66 victories and postseason berths in each of his three seasons. The 2012 HL Coach of the Year, Drew ascended to the head coaching position on May 17, 2011 after spending six seasons as an assistant and associate head coach with the Crusaders.

Series Notes: Valpo owns a significant 30-9 edge in the all-time series over Youngstown State, and is 14-2 against the Penguins since joining the Horizon League. The Crusaders have won four consecutive games in the series, but are just 9-8 all-time in the Beeghly Center. Valpo had dropped two straight at YSU before a 74-71 win on the road against the Penguins last year. Earlier this season, the Crusaders downed YSU, 79-64, behind 18 points and nine rebounds from Alec Peters.

...notes from Wright State
The Crusaders out-rebounded WSU 46-25 and pulled down 17 offensive rebounds, leading to 18 second-chance points.
Valpo limited WSU to 37.7% shooting from the field, the fourth straight game the Crusaders have held their opponent under 40%.
The Crusaders did not make a substitution for a nearly eight-minute stretch in the second half, turning a two-point deficit into a double-digit lead.
Valpo scored on just five of its first 16 possessions in the second half, but then scored on 15 of its final 20 possessions.
All five starters scored at least eight points and four finished in double figures.
Vashil Fernandez paced the Crusaders with 14 points his second time leading Valpo in #HLMBB play and nine rebounds.

...looking ahead
@ValpoBasketball returns home briefly before concluding the three-game road stretch Friday evening in Green Bay.
The Crusaders then return to the ARC on Monday, Jan. 26 to host Milwaukee.

...on the road
@ValpoBasketball is 4-2 in true road games so far this year and 9-2 overall away from home.
Valpo has flipped its luck away from home this year, after going just 5-9 on the road last season.
Under Bryce Drew, Valpo owns a 18-9 record on the road in #HLMBB play.

@YSUMensHoops
Youngstown State enters Tuesday’s game at 9-12 overall and has dropped all six of its #HLMBB games so far.
The Penguins are 5-4 overall at home this year, but have lost league home games to Wright State and Cleveland State.
Marcus Keene leads YSU, averaging 16 points per game on 42.4% shooting from behind the 3-point line.
Bobby Hain contributes 14.9 ppg, shooting at a 52% clip, and 7.9 rebounds per contest.

Up to 17 Wins
@ValpoBasketball reached 17 wins on the year with the win at Wright State on Saturday.
The Crusaders are one of just eight programs nationally with 17 victories as of the end of play on Sunday.
This year’s Valpo team has reached every win from 10 through 17 earlier in the calendar than any other team in program history.
The 2007-08 squad earned its 10th win on Dec. 15, the only other team in program history to hit 10 wins before Christmas.

Hitting the Glass
Valpo has out-rebounded opponents by double figures 10 times on the year and enjoyed a +21 edge last time out against Wright State.
The +21 margin was the Crusaders’ best against a D-I opponent since a +22 advantage on the glass last year against Saint Louis.
By contrast, the Crusaders have only been outrebounded on two occasions losses to New Mexico and Missouri.
The Crusaders pushed their league-leading rebounding margin to +8.9, good for 12th in the nation.
Valpo leads the league in rebounding margin by five boards, and also paces the circuit in both offensive and defensive rebounding percentage.

Defensive Prowess
The Crusaders have given up exactly 56 points in each of the last three games, continuing a strong season defensively.
It marks the first time Valpo has won three straight games and given up 56 or fewer points in all three since Dec. 7-17, 1983.
Valpo ranks 42nd nationally in scoring defense and 20th in field goal percentage defense.
Valpo boasts a defensive efficiency of 93.7, 49th-best nationally the Crusaders haven’t ranked in the top-100 since 2006-07.
Crusader opponents are shooting just 41.5% from 2-point range (13th nationally) and are pulling down just 25.5% of available offensive boards (15th nationally).

Vashil and His Block Party
Senior Vashil Fernandez continued his strong season defensively last time out with a pair of blocks last time out at Wright State.
Fernandez ranks second in Crusader history with 132 career blocks.
Fernandez tallied a Crusader single-game record eight blocked shots earlier this season against Goshen.
Fernandez is averaging 3.0 blocks/game this year, leading the Horizon League and ranking 12th nationally.
Fernandez has totaled 60 blocks this season, already fourth-most in a single season in program history.
Fernandez has seen his blocks per 40 minutes rise from 3.5 last year to 5.1 this year, while his fouls per 40 has dropped from 6.2 to 4.4.
Led by Fernandez, the Crusaders are averaging 5.0 bpg this year, just shy of their record-setting 5.1 bpg pace from last season.

Going Advanced Valpo’s offense has averaged at least a point per possession in all but five games this year the three losses, and the last two victories.
Defensively, the Crusaders have surrendered less than a point per possession in all but three games.
Alec Peters ranks fifth nationally in Offensive Rating among players who use at least 24% of their team’s possessions.
Vashil Fernandez currently sits sixth nationally in block percentage.