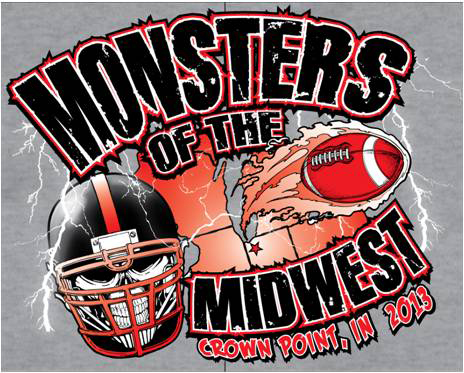 The inaugural Monsters of the Midwest youth football tournament will be taking place at the Crown Point Sportsplex Nov. 9 and 10. Twenty-two teams from Indiana, Illinois and Wisconsin will be taking to the turf for the two-day event.

According to Tournament Director Mike Albert, Crown Point was selected as the location for the tournament because of its proximity to Chicago and surrounding areas.

Albert stated that while this is the first year for the Monsters of the Midwest tournament, the organization is more than confident they’ll have just as much success as they did with the Midwest Gridiron Classic held in DeKalb, Ill.

“The first year in DeKalb, we had seven teams, and this year we had close to 100 teams from seven states,” said Albert. Albert went on to say the Monsters of the Midwest tournament has already generated three times the amount of teams in the first year than the DeKalb tournament.

Spectators are invited to watch as teams in 9U, 10U, 11U, 12U and13U divisions battle for first place. Cost to attend is $5 for adults, $3 for students and children 5 years old and under are free. Game times, brackets and more information can be found at www.midwestsportsclassics.com.