David Sheets, from Morgan Township, recently won several awards at the Indiana Association of School Broadcasters competition at the University of Indianapolis.

In early February, Mr. Bob Phelps, Instructor of Video Production and Media Studies at the Porter County Career Center, and his students submitted eleven videos for various categories. On March 9, Phelps and his group attended the event.

"We took 24 students, some first year and some second year, from various Porter County schools," said Phelps. "The day started at 5:00 a.m., and we arrived in Indy at 9:00 a.m. then had two sessions of small group classes with speakers from various aspects of the media and broadcasting field." 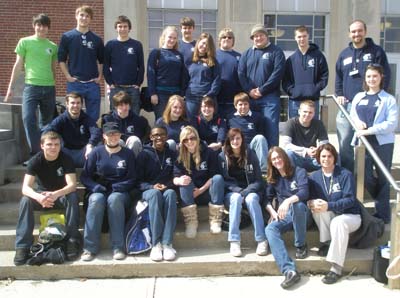 At the afternoon awards ceremony, David Sheets won second place in the "In Depth" category for his class profile about the Video Production and Media Studies class. David also took first place for the "Show Open/Close" category for the opening and closing sequence he produced and edited for the Pines Village project called "Discovering Our National Treasures." Both videos are available for viewing on ValpoLife.com's Community Video page.

IASB consists of over 25 high schools from around the state that study radio, television, broadcasting, and media. Over 450 students attended the student convention and competition.

Congratulations Mr. Phelps and the 24 kids participating from the Video Production and Media Studies group at the Porter County Career Center!  David and the rest of the team have much to be proud of!