By: Sterling House and Clare Bridge of Valparaiso Last Updated: May 7, 2012 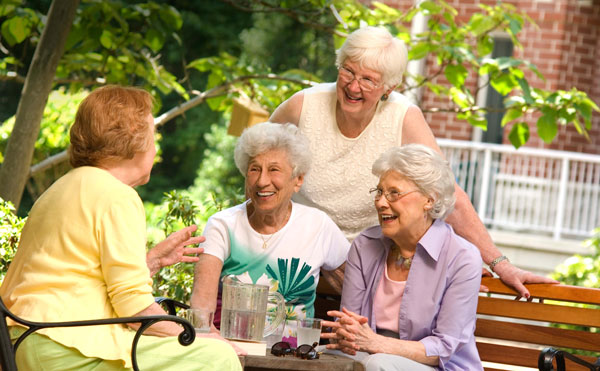 Once upon a time, most people who went into an assisted living facility or nursing homes were very old. Times have changed. More and more young seniors are choosing to moving to a senior community while they are still young, vibrant and independent, knowing they will be well-cared for as they age and their needs change.

Residents in senior communities today range in age from 65 to 105. Because of the leading edge of the baby boomers, and better health care for the very old – letting them live to be even older – many people in senior homes are nearly a generation younger than the very old people (in their late eighties and nineties) with whom they share the neighborhood. The music, the culture and the expectations of these younger elders are quite different than the older ones.

As a result, "resident-centered care" has gained a strong foothold in most assisted living and skilled nursing homes. The environment, activities, food and music is planned with multiple generations in mind.

The very old generation grew up during the Great Depression, some even before that time. Many were farmers or laborers with large families who were expected to contribute to the family well-being by working the fields or getting jobs in factories at a young age. The majority of this generation lived a fairly simple life. The best way to spread information was through the neighbors or to make a call on the telephone – the party-line you shared with several other people. It was a luxury to go to the drive-in for a meal out, perhaps once a month.

The young seniors who are now edging their way into senior communities are a generation who just missed being baby boomers (some are actually boomers, but may need health care assistance at a younger age because of a stroke, MS or other ill health). This generation remembers sitting around a giant radio, often the centerpiece of the living room, listening to The Lone Ranger. Then later actually viewing the show in their homes on a huge television set with a small, round screen. They remember, as children, ducking under their desks during simulated air raids because of the cold war and threat of Communist attack.

They also got used to smaller families, a more stable financial situation and a comparatively sophisticated lifestyle. Many of these young elders are now doing yoga in classes and Pilates in gyms. They are volunteering in massive numbers, and running marathons. They have different expectations than the generation preceding them.

These young seniors may want rock and roll for their afternoon music rather the "kitchen band" from the neighboring town, or another go-round of Lawrence Welk, on video. They want designer coffee, not that old, perked dishwater. Women wear jeans, not house dresses. They want computers, Wii and quality exercise equipment. This new generation of "younger" elderly residents want to continue living their lives with as little change as possible, not meekly follow the worn path into old age.

Generations, of course, overlap and we can’t stereotype them. But senior communities are finding that they have to offer more variety to their residents. As modern medicine keeps Great-Great Uncle John alive into his 90s, Great Uncle John has a stroke, and moves into the same assisted living residence as his dad, though he is just 70. Shortly after, his wife Janet, a bit younger but struggling with rheumatoid arthritis, enters the same home. She is just 62. Such a wide range of ages in one senior community!


Are Senior Residences Up to the Challenge?

Residences must be up to this challenge. They must prepare for these multiple generations. The good care homes and assisted living facilities are getting a handle on these changes.

So, will the really "hip" assisted living facilities have high-speed internet, Wii and Starbucks? Yes – many already do. And it may be set up next to the "country store" atmosphere preferred by the very old elders. It is good for all generations.

Brookdale's communities enable residents to enjoy life at every stage, lead an active and engaged lifestyle and still have access to longer term care when they need it.

Brookdale Senior Living communities feature a Personalized Assisted Living facilities concept that tailors a residence program based on the individual’s needs. Find a Brookdale location near you.