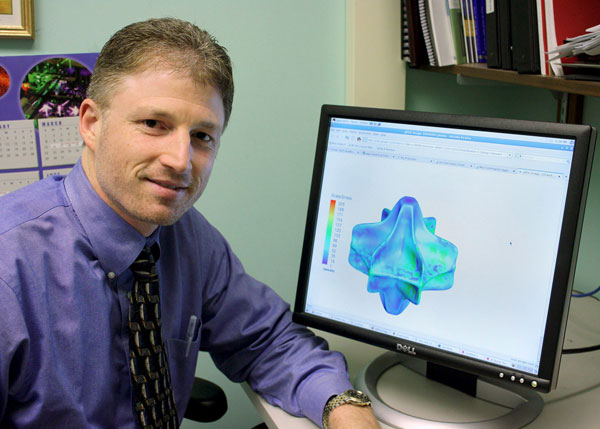 Researchers have created a new type of heart pump inserted with a catheter to improve the survival rate for infants undergoing a series of surgeries to correct a deadly birth defect.

The researchers are developing a "viscous impeller pump" for children born with univentricular circulation, a congenital heart disease that is the leading cause of death from birth defects in the first year of a child's life, said Steven Frankel, a Purdue University professor of mechanical engineering.

The innovation also might be used for temporarily treating adults with the disease.

Babies born with the defect have only one functioning ventricle, but French surgeon Francois Fontan discovered more than three decades ago that the infants could survive on a single ventricle by restructuring the configuration of blood vessels called the inferior vena cava and superior vena cava. The infants must have a series of three open heart surgeries performed over a period of months or years because they are not be able to survive the shock of all three surgeries at once.

At least 30 percent of the babies do not survive the surgeries, called the Fontan procedures.

To improve the survival rate, Mark Rodefeld, a medical doctor and associate professor of surgery at the Indiana University School of Medicine, proposed in 2003 to provide a mechanical pump to assist the heart during surgery.

Such an innovation would make it possible to perform all three surgeries at the same time, while also providing a temporary heart-assist technology for adults who've had the surgeries, Frankel said.

"A big advantage of this pump is that it gets delivered through the skin with a catheter without open heart surgery," said Frankel, who is working with Rodefeld and other researchers at the IU School of Medicine, the University of Louisville and the Rose-Hulman Institute of Technology's Rose-Hulman Ventures, which is developing a prototype of the pump.

Researchers plan to implant the new pump into a four-way intersection where the inferior and superior vena cavae meet the right and left pulmonary arteries. Once inserted with a catheter, the pump can be dramatically expanded, forming a shape that resembles two cones joined at the base. The device spins at about 10,000 rpm, connected via a slender cable to a small motor outside of the body.

"A major challenge was, how do we get this into the body, and we thought of the cocktail umbrella," Frankel said. "It starts out flat and compact and then opens out with a similar shape, with upper and lower segments."

A pump is needed because relying on one ventricle reduces the heart's circulatory force.

"It's a weak circulatory system, so you don't get really good pumping into the lungs, and the oxygenated blood returning to the heart doesn't quite fill the ventricle to begin the cycle over again," Frankel said. "A patient right now who's walking around in their 20s, who had the surgery 20 years ago, may start having heart problems and need some support, either as a bridge to transplant or as a temporary means of support. This pump represents a way to do that in an outpatient setting. It is designed to be in the body for two weeks at most, almost like a disposable item."

Experiments at the University of Louisville that mimic the circulatory system show the degree of damage done to blood cells by the spinning pump is acceptable for clinical use. That work was conducted by U of L's Guruprasad A. Giridharan, an assistant professor in the Department of Bioengineering.

Findings were detailed in a research paper that appeared in September in the Journal of Thoracic and Cardiovascular Surgery. The paper was written by Rodefeld; former Purdue graduate student Brandon Coats; Fisher; Giridharan; Chen; John W. Brown, a surgeon at the IU School of Medicine and James Whitcomb Riley Hospital for Children; and Frankel.

Future work may involve the use of animals, with clinical studies in humans to hopefully follow, Frankel said.