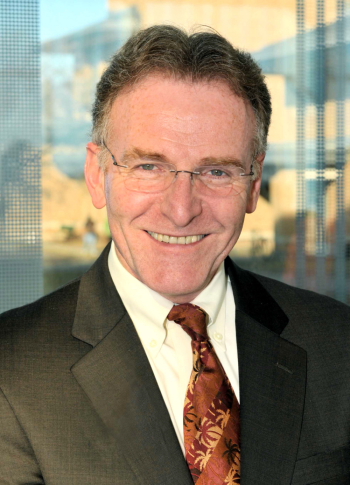 After only a few days as the new Chancellor of Indiana University Northwest, Dr. William Lowe is already setting the tone and direction for what promises to be an engaged and dynamic administration.

Lowe, who succeeded the previous chancellor, Dr. Bruce Bergland, on July 1, gave his first public address to the Gary Chamber of Commerce at a July 12 luncheon. In those remarks, Lowe told the city’s civic and business leaders that IU Northwest would continue to serve as an essential resource for the community of Gary and for the university’s entire Northwest Indiana service region.

“We will continue to do our part,” Lowe said. “You have my commitment, and that of my IU Northwest colleagues, to continue to carry out the Indiana University commitment to academic excellence, and to maintain the important relationships and commitments that are already in place with people and organizations in the Gary community.”

Lowe, 59, described himself and his wife, Pamela, as “city folks,” and said they were drawn to IU Northwest, in part, because of the school’s urban location.

“I have devoted a career to working at urban colleges and universities, particularly in the Midwest, and including the South Side of Chicago,” the Chancellor said. “So many of the challenges facing Gary and the region are all too familiar to me, and I look forward to learning more about how it plays out here, including the many opportunities that exist here for growth, renewal, and innovation.

“Working on the full picture is important, because I believe that the future of cities and their people matters. I know you will agree that this city’s best days lie ahead,” he added.

Lowe was recommended for the IU Northwest Chancellorship by a 12-member search committee led by Edwin Marshall, IU vice president for diversity, equity and multicultural affairs. That committee also included students, faculty, staff, and community members. Lowe noted during his Chamber address that Gary Chamber President Chuck Hughes was also a member of the team that selected him.

“I thank Chuck not only for his valuable service to the university -- and for making a good choice! -- but also because his role was an immediate indication to me of the importance of campus-and-community relationships and connections here in Gary,” the Chancellor said.

Lowe is the campus’s sixth Chancellor and 12th chief administrator. He came to IU Northwest from Metropolitan State University in St. Paul, Minn., where he had served as provost and vice president for academic affairs since 2003. Lowe served as interim president of that university from 2007-2008, and he was also a professor of history.

Lowe is active in research and writing in the field of modern Irish history, and he has been a Fulbright Scholar. He holds a bachelor's degree in history from Michigan State University and a doctorate in modern history from Trinity College in Dublin, Ireland.

In his remarks to the Chamber, Lowe praised the contributions of his predecessor, and pledged to build on the many advancements and successes of Bergland’s Chancellorship.

“Dr. Bergland and I had the opportunity to get to know each other a bit during the very helpful transition that he arranged for me,” Lowe said. “And it is very clear that IU Northwest is a much better, stronger and more engaged campus as a result of his work and commitment. I know that you all join me in thanking him for all of his contributions.

“It is my aspiration, and my job, to continue to build on this good work and do likewise. And also to recognize that Bruce has set the bar very high,” he said.

Lowe commented on the warm and neighborly reception that he and his wife have received from the campus and the community since arriving in Northwest Indiana. He noted that university alumni and supporters have expressed to him their great esteem for the institution.

“In only my first week, I have spoken with IU Northwest alumni who have told me about the extraordinary difference that IU Northwest -- and the flexible, responsive way we do things -- has made in their lives,” the Chancellor said. “That is good to hear, but it is also a challenge to continue find ways, especially in these financially tight times, to provide the academic experiences that have that transforming impact on our students’ lives.”

Also in his remarks to the Chamber, Lowe commented on the status of the planned replacement for Tamarack Hall, which was closed due to flood damage in late 2008.

“This project is a high priority for me and for the campus,” the Chancellor said. “I have every assurance through Indiana University that the (state) funds that have been appropriated will be released, so that planning and design can proceed. We do not yet know the schedule, but the intention at IU Northwest is that the new Tamarack will be a signature addition not only to the campus but for our entire community.“

Chancellor Lowe invited Gary Chamber members to learn more about how the university might partner with them on mutually beneficial projects that would serve the public interest. He emphasized that IU Northwest has a significant number of offices and programs that need and welcome strategic partnerships with employers and organizations in Northwest Indiana.

“We are eager to see how we can match your business and community goals with our educational and intellectual resources,” he said. “In this difficult, lean financial environment, campus-community partnerships enable us to make all of our resources more efficient and productive.

“I guess the point is that we really are in this together,” Chancellor Lowe concluded. “By drawing on our areas of strength and expertise, and sharing our aspirations, we can put some shape around what the future will look like and work toward it.”