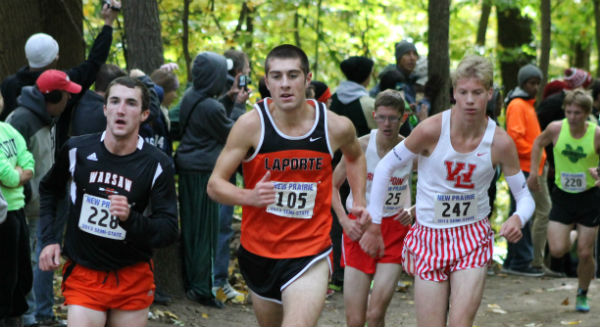 A windy day didn't keep the crowds from coming out to New Prairie to watch the Semi State Championships taking place on this chilly Saturday morning.

Banners were waving and the tents were enclosed today with everyone trying to keep warm. How were the runners going to run on this chilly day? Gloves, hats and jackets were out in force today because no one was going to miss the New Prairie Championships. 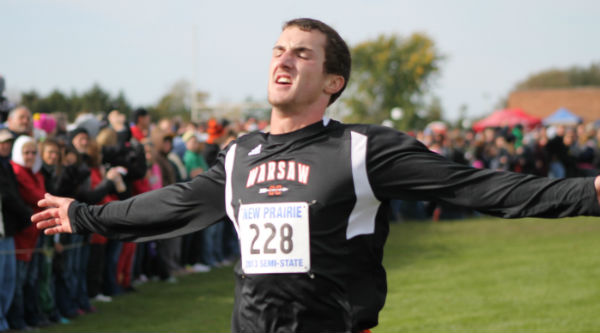 The boys were out to the line first today. Runners to watch included Anthony Didion of La Porte, Cooper Williams of West Lafayette, Ellis Coons from Warsaw, Ryan Kritzer from Munster, Brian Blaylock from Lowell and Ari Coulopoulos from Valparaiso.

The runners didn't seem to mind the cold, anxious to get to the line to start the race and see who would make it to the finish first. Early in race were Blaylock, Coulopoulos and Kritzer, followed closely behind by Coons and Didion. 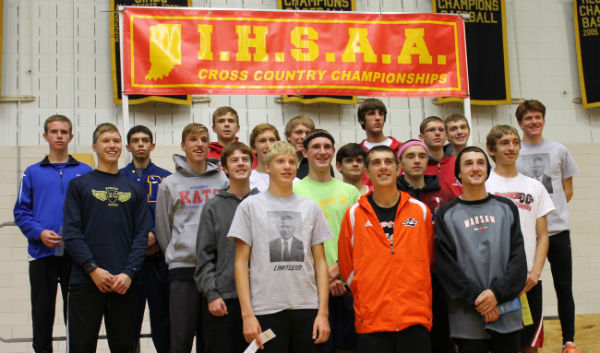 "I decided to sit back in the pack but stay high enough that I could out kick them at the finish" said Didion. " I feel good about how I did. If I had to lose to someone I don't mind it being Coons cause he's a great guy." He knew todays race was about running smart, saying the wind wasn't really a factor. Unsure of the team results he was hoping they had enough to make it out as a team because he really wanted to run with his team as opposed to an individual in Terre Haute. The winner of the boys race was Ellis Coons of Warsaw with a time of 15.45.5. Just finishing ahead of Didion who had a time of 15.46.6. Third place was Cooper Williams of West Lafayette, 4th Ryan Kritzer of Munster, 5th Brian Blaylock of Lowell 6th Ari Coulopoulos of Valpo, 7th Robert Duke of Eastern Greentown, 8th Matt Grider of Western, 9th Tyler Gray of Crown Point and 10th place Matthew Fahs-Brown of Manchester with a time of 16.12.9.

The top six teams advance to Terre Haute to compete in the State Finals. First place honors went to the West Lafayette Red Devils with a team score of 89. In second was Warsaw with 108, 3rd Valparaiso with a score of 128, 4th Crown Point with 141, 5th was Lake Central and 6th place going to Munster just edging out La Porte with a score of 181 to La Porte's 182.

On the girls side, La Porte's Elena Lancioni was the one to watch, along with Lauren and Kristen Johnson of West Lafayette, Madeline Lilly of Twin Lakes and Taryn Thor of Northwestern.

At the gun the girls took off towards the first turn and into the woods. Taryn Thor had an slight lead over Lancioni up the first hill. The lead didn't last for long.. as everyone eagerly awaited the last turn into the homestretch Lancioni appeared first with quite the lead. Lancioni ran strong through the finish and had a time of 18.11.3 Following Elena were three West Lafayette runners: Lauren Johnson, Kristen Johnson and Delaney Barber. The trio finishing in 18.17.3, 18.26.5 and 18.35.1 respectively. Three coming in so early helped propel their team to the first place victory as well as a record tying finishing team score of 32.

Lancioni said, "I''m mostly happy that I will be running with my team down in Terre Haute." Having qualified as an individual in previous appearances, she said "that is our reward for putting in a lot of hard work."

In the girls division the 1st place honors went to West Lafayettte with the record tying score of 32, followed by LaPorte with 116 and the Portage Indians taking 3rd with a 126, Warsaw took 4th with 167 and Lake Central taking the last spot to advance with a score of 179.

Coach Artherhults of Hobart was proud of his teams efforts. Hobart has three individual qualifiers going down to Terre Haute. Brent Dunn, Mindy Whidden and Celena Guerrero. "Although our teams didn't make it out this year I'm proud of our seniors.. they were a great bunch this year."

The State Championships will be at the LaVern Gibson Championship Cross Country Course in Terre Haute on Saturday, Nov 2 at 1 p.m. eastern time for the boys and 1:45 p.m. for the girls race.