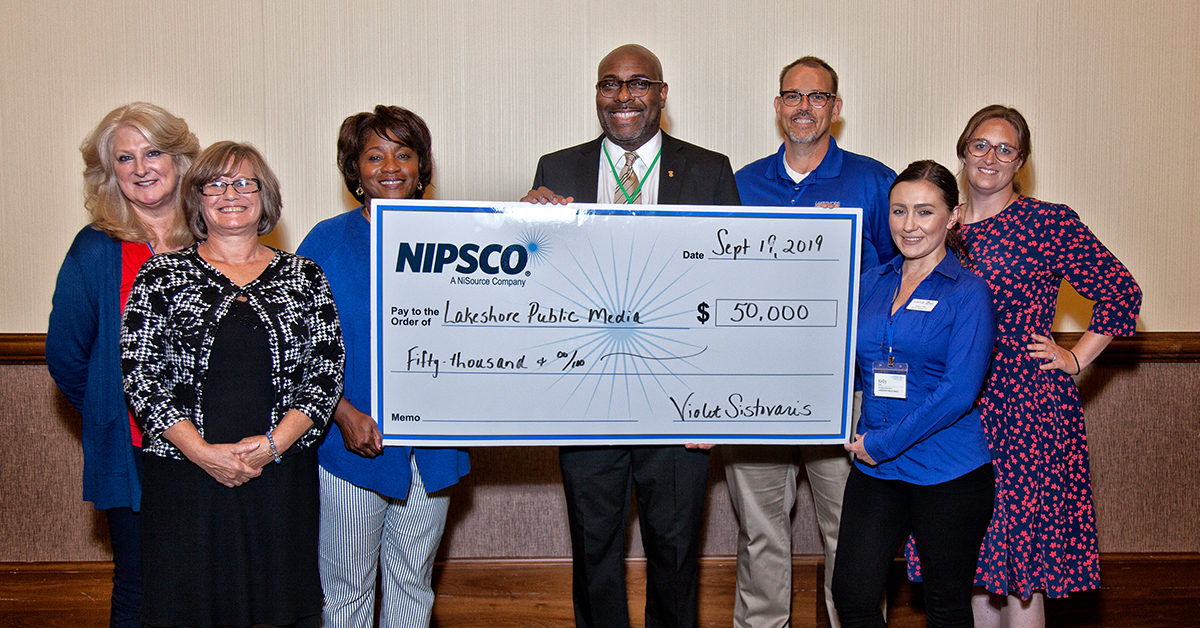 Representatives from NIPSCO and the NiSource Charitable Foundation, the philanthropic arm of NIPSCO’s parent company, presented Lakeshore PBS with a combined $50,000 donation (at $25,000 each) to continue local productions and high-quality programming that targets Northwest Indiana.

NIPSCO, a longtime supporter of Lakeshore PBS and Lakeshore Public Radio, made the check presentation during the public television station’s professional women’s conference on September 19. The contribution goes towards Lakeshore Public Media’s ongoing operations including the production and broadcast of community-focused local programming as well as the national PBS programming the NW Indiana community has come to expect for the last 30 years.

“NIPSCO and the NiSource Charitable Foundation are proud to help further the mission of Lakeshore Public Media,” said Jennifer Montague, NIPSCO’s Vice President of Communications and External Affairs.  “Our long-standing commitment to this organization underscores our belief in the enormous value local programming brings to our community.”

“After a challenging year, this generous gift shows that NIPSCO understands and values our efforts to serve Northwest Indiana,” said James A. Muhammad, President and CEO of Lakeshore Public Media. “On behalf of all of us at Lakeshore Public Media, we truly appreciate the years of support from NIPSCO.”

A violent storm damaged the Lakeshore PBS TV transmitter in July 2018, knocking the station off the air.  Over the last year, Lakeshore PBS has committed over $400,000 in equipment and repairs, removing the old transmitter and accompanying equipment and purchasing a new solid-state transmitter.   The $25,000 gift from the NiSource Charitable Foundation will be applied to a new studio transmitter link, which will be the last piece needed to update the entire transmission system.

Lakeshore PBS asked members, viewers and the Northwest Indiana community to help the station ‘Bounce Back’ from the extended outage.  The station’s goal was to raise $125,000 through a community support campaign to replenish a portion of funds used for transmitter and equipment repair.

The $25,000 gift from NIPSCO will be applied to the station’s campaign and marks the station’s largest single contribution to the effort to date. “This is a big step to returning to normal operations and greater sustainability,” Muhammad said.   “It is a most welcome shot in the arm that comes at a critical time in our history.”

“This nomination shows that while we experienced a slew of challenges, we were still able to launch two new shows and rebuild our website to offer our viewers more programming options,” Muhammad said.  “This generous gift and the IBA nomination show that our hard work is being recognized and appreciated.”