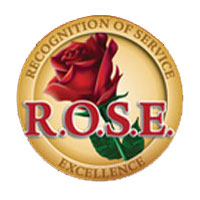 This year will mark the 11th annual R.O.S.E. and R.I.S.E. Awards, presented by the South Shore Convention and Visitors Authority. The SSCVA is seeking nominations for outstanding front-line employees, who go above and beyond the call of duty on a regular basis.

The Recognition of Service Excellence (R.O.S.E.) Award winners are rewarded with a day of pampering, an awards dinner and more than $1,000 in prizes and gifts. The 2017 Awards ceremony will take place on September 27 at the Halls of St. George in Schererville.

Nominations can be submitted by customers and/or managers at www.rose-awards.com. Customer comment cards, photos and additional reviews from Yelp.com and Google Reviews can be uploaded directly to the nomination form found online.

Submissions must be received by Sept 1 to be considered for the 2017 R.O.S.E. Awards. Nearly 50 finalists are chosen and surprised at their workplace where they are invited to a day of pampering and the official R.O.S.E. Awards dinner. One dozen R.O.S.E. winners will be celebrated and announced at the dinner on Sept 27.

The Recognition of Success and Excellence (R.I.S.E.) nominations are also accepted at www.rose-awards.com. The R.I.S.E. Awards honor managerial employees or past R.O.S.E. winners who have risen above expectations when directly interacting with customers.

For sponsorship information or to RSVP for the Awards dinner, please contact Danielle Sparavalo at 219-8989-7770. For all other details, visit www.rose-awards.com.