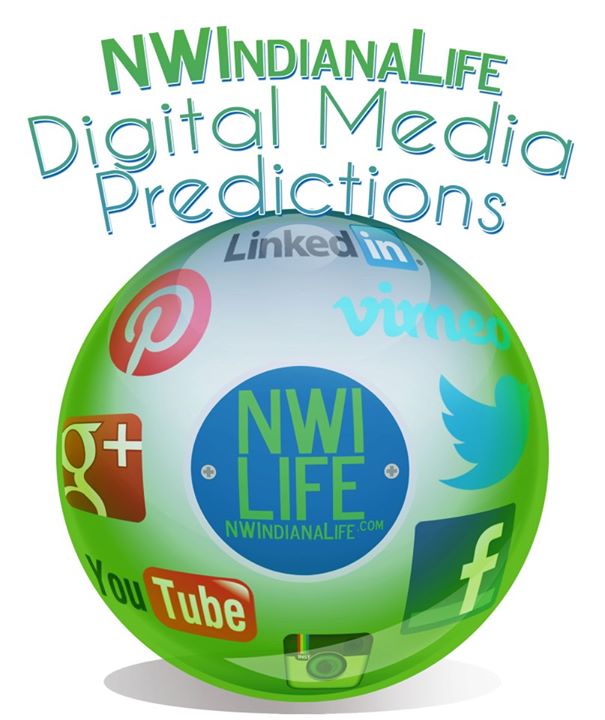 Every day, we use some sort of digital tool to share information. An iPhone, a computer, a new watch, an internet-connected television. Over the past few years, the steps toward this new digital environment have been significant and frequent and that has turned up the speed and connectivity in our living world.

What do you need to know to prioritize where you spend your time and resources in this ever-changing social and online media world? What can we expect in the next phase of the digital media realm? How can your business benefit?

Join in our conversation about the 2017 digital world, where we discuss with the media gurus from organizations throughout Northwest Indiana about what trends are coming and what is being left behind.

Read their advice below, and follow these folks online to stay connected as the year evolves. Please share your own prediction in the comments below or send them to share@ideasinmotionmedia.com.

Michelle Andres, Group 7even | Facebook | Twitter
2017 will be the year of video. We will see brands really try to build brand authenticity through the use of niche influencers rather than brand direct video. With that however, we will also see an increased demand for metrics to tie video interaction to sales and ROI (Return on Investment). After everyone jumps on the band wagon, people will start to ask if it's even working, and the major players -- yes, you, Facebook Live (and others), will need to be able to prove your value in terms of metrics that convert.

Chris Mahlmann, Ideas in Motion Media | Facebook | Twitter
Facebook Live starts the year as one of the biggest stories, and Facebook Messenger adds an equally game changing challenge throughout the year integrating much of Snapchat, Google Messaging, disappearing content, and texting. LinkedIn further owns the business to business contacts and information segment via their successful acquisition by Microsoft, and the line between Instagram and Facebook fades. Podcasts and live radio have a resurgence. The gap that exists between people that natively engage online and those that are tone deaf and trying to sell stuff widens even more dramatically. You can't pay enough to have bad content generate good results in a story and news oriented environment. #Authenticity ranks as the most important attribute across any platform - how does that segment want to authentically communicate with you?

Dave Woodson, Prime Real Estate | Facebook | Twitter
Virtual Reality and Facebook Live will be two great ways connect to clients and embrace the idea of spontaneous video, but with value that puts yourself and your company out there. Keep telling Stories.

Steve Dalton, Cender and Company | Facebook | Twitter
I have to agree with many other commenters, businesses will want metrics and accountability. They can't keep paying without the business growth and sales to show for it.

Brett Fuller, Ideas in Motion Media | Facebook | Twitter
I don't think a new platform will be on the horizon - we had a boom about 10 years ago, and most people are just starting to figure out how to use them. I think this will be a year of divide and we'll see a bigger gap than ever of people who know how to maximize each platform vs. the ones who just know how to use them.

Darlene McCarty Cohn, D. Cohn Communications | Facebook | Twitter
There are an assortment of new tools available for all social media platforms, some of which will have a greater impact than others. All the major social media platforms are in a race to replicate one another’s most engaging features, and some stand out above others: live video is perhaps the hottest feature right now and we expect that trend to grow as brands figure out how to use it.

That said, we think the most important trend in social media is the shift in user engagement – in other words, customer service. More and more people are turning to social media to interact with their favorite brands and they expect replies, fast. As social media presences grow, it’s now easier to send a message to your favorite business than to call, and people are taking advantage of that. Businesses and organizations simply must have a system in place to offer excellent customer service online, especially outside of traditional business hours. We expect social customer service to grow exponentially as people realize the ease with which they can reach their favorite organizations.

Nathan Press, White Lodging Services | Facebook | Twitter
I always like to listen first and chime in only when I have something to say. And I think I have something a bit different to contribute based on my experiences in a lot of medium sized businesses - Far past the start-up mindset, but not quite to the big business category.

And for companies in that category I think we continue to see a shift away from attempting to figure social media out. They don't have (or can't retain) social managers with an ownership mentality (like the small startups have) and aren't willing to commit the resources necessary to feed the content machine (like the big brands). They want to see immediate ROI and this isn't the place for it (was it ever?).

So, they will get smarter about where to focus limited resources while still participating in social outlets enough to engage with customers that want to engage there, but focusing their limited marketing dollars on the things that make an impact.

This might still be in social (targeting events with things like Snapchat filters, creating short-form video content, or maybe even experimenting in VR) but the larger portions of spends will be in updating still-outdated websites and enhancing paid media which drives direct return.

Let's hope they also come to the realization that until the purveyors of social software solutions come up with affordable methods to manage the day-to-day, they are better off managing natively and letting the agencies and the big boys pay for the fancy software that requires full-time support to realize the value.

Nat Finn, NatFinn.com | Facebook | Twitter
I think the biggest change will be from investors, who appear to believe the luster has come off the shine for Social Media. The breakthroughs and demand for clean & renewable energy as well as AR/VR will maximize their time, along with business-focused applications. This means the social media companies left standing, win. LinkedIn found a lifeline in Microsoft. Twitter is left out in the cold, probably because there is no sense found in paying for a platform with minimum functionality when you want the data and emails, which are essentially duplicated on their relative competitors.

Otherwise, it's a matured market. Companies have made their marks and are settling into their grooves. This means that it's easier to understand their niches.

For larger brands, it's less paying attention to complaints on social media, since folks are much, much more likely to complain than praise, and focus more on making social media a more casual, shoot-from-the-hip extension of their brand messages. Their loyal customers will fuel their momentum and popularity on these platforms. It's not fair, but that's how it goes.

For smaller businesses who must pay to get an impact from social media, it'll still be finding the ones that bring the immediate ROI, and automating the rest for syndication. So, the same. AdWords, Bing Ads, YouTube, Niched FB Ads, LinkedIn Ads. The cool part is the analytics software has matured to the point where they can track multiple points of contact with the client, and sync with CRMs to track buying cycles.

Geographic-focused businesses should still spend more time encouraging niche-applicable reviews - Google, TripAdvisor, Facebook, TripAdvisor…and the others that those big ones used by peer editors. It's the new, old, new…word-of-mouth.

AR/VR and the like are worth monitoring, but the technology is still too expensive for most everyday consumers this year. This will probably be the case next year as well. Video is becoming more and more affordable, but, once again, it will depend on how well businesses target.

Digital Media Companies & Personalities to watch:
1) Google. Google Plus is hemorrhaging, but they're not forcing it on people anymore. And it's still active. They might have finally learned to grow things organically. This might be the year they shake their, "where startups go to die," moniker, and bring out new applications. They might have to up their "G Suite" to compete with the aggressive updates Microsoft is making in Office and in hardware. I'm still guessing a MacBook Pro competitor, giving that they're incrementally growing their laptops the same way Microsoft did with their Surface line.

2) Facebook. Because they won, and the top talent still flocks to them to work on their numerous and diverse projects. All the momentum in the world.

3) SnapChat. Will they figure out the monetization issue? Or will they get bought out? And, if they do monetize it, will the kids run away from it like they did with Facebook when advertisers used it to seek out their demographic? It will be interesting to watch.

4) Reddit. They just keep doing what' they-do.’ Their faithfulness will pay off as being the first place people turn to for news, faster than Twitter – who's still having PR issues from the "no one wants to buy us for a couple billion" blues. They will not win the position so much as Twitter might lose it because of their PR fallout. Also, you can simply do more on Reddit, and their fan base is filled with devotees, and not brands and snake oil salesmen trying to tell you how "you're doing it wrong."

5) Amazon. Rumor has it something's a-brewin' up in Seattle. Amazon has the exact opposite problem other media outlets have. Unlike most digital media companies, Amazon already has the following: reputability, community, revenue model – complete a growing intermodal logistical fleet of what's soon to officially include shipping, and sought-after comment and review interactions. They have a content channel that rivals Netflix, and they even let you read a new book a month. The only thing they haven't done has been to galvanize together with a simple, socially-interactive platform.

6) Elon Musk. Some call him the hope for the future, with SpaceX. Others call him the biggest welfare recipient because of the generous tax abatements he receives. If the new conservative political administration demands more from him, like something resembling a profit some day, then his projects could be shelved before they come to fruition. If he goes down, then investors might revisit more of the consumer market, bring more social media investment back to the party. But, honestly, I doubt it. So many are going Elon's direction, and that's a good thing for the future of our technical innovation.

Last thought: the fusion of the 2-in-1 tablet laptops with 4k screens is going to be huge. Microsoft did it with the Surface. Dell just did it with their powerful XPS 13 at the start of the 2017. Power, portability, and usability used to have to be found in 3 different devices. Now, you can efficiently do it all in one device. It's going to free up consumers so much more with their time. This means more time online to do more things. Biggest innovation since the announcement of the iPhone.

It's an incredible direction we're heading in when it comes to innovation. If digital media doesn't directly benefit, it will still get to use the advancements in time. It just might not be this year.