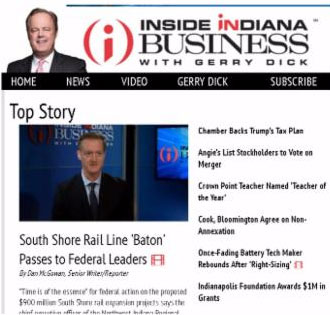 Backed by strong economic growth projections provided by the Northwest Indiana Regional Development Authority, top Indiana officials are urging federal support for the West Lake extension and South Shore Double Tracking Projects. Last week, Indiana Governor Eric Holcomb made it a point to discuss the project with Vice President Mike Pence during, while Senator Todd Young made the case directly to President Donald Trump during a visit to Indiana.

"We could not be more encouraged by the level of support we are receiving as we work to transform the economy of Northwest Indiana," said RDA President and CEO Bill Hanna. "For a long time, leaders from our region have said that Northwest Indiana doesn't get the attention it deserves from Indianapolis. Whether you believe that's true or not, it certainly isn't the case here. Local, state and federal officials, Democrats and Republicans, have come together to back commuter rail expansion because of the immense difference it will make to Hoosiers here and state-wide."

As the Times of Northwest Indiana notes, completing the nine-mile West Lake extension from Hammond to Dyer in Lake County, and fully double tracking the existing line from Gary to Michigan City "is an all-access ticket to job creation, economic development and connectivity between Region folks and the economic engine that is the city of Chicago." Just in Lake and Porter counties, both projects combined will spur more than $2 billion in private development around the stations, attract an estimated 11,000 new residents and create about 6,000 new permanent Indiana jobs. For complete details, download the RDA's Comprehensive Strategic Plan.

That focus on private investment was praised by Transportation Secretary Elaine Chao after she was briefed on the project during a visit to South Bend in August. "That is an application that is in progress and I will not talk more about it," she told reporters after the meeting. "But suffice it to say, the bipartisan nature and the public-private partnership aspects of any project would be ones that are important to us. Once again, Indiana appears to be leading the way."

Like D.C.,Chicago is also taking notice of the effort to strengthen and expand the region's connectivity to the nation's third-largest economy. The Chicago Tribune just featured the projects, and WGN radio in Chicago recently had Bill Hanna on to extol the region's virtues (listen here).

The RDA continues to work closely with Indiana's Senators and Members of Congress on securing federal matching funds for West Lake and Double Tracking. "This is a critical time for the projects," Hanna notes. "We are committed to making them happen, both for the tremendous economic benefits, and for brighter future for our children and grandchildren they represent."