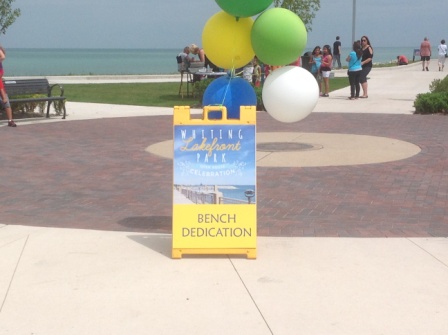 We're just back from the Whiting lakefront, where families and friends from the region celebrated the dedication of dozens of new park benches at the Whiting Lakefront Park.

The $22 million project was fueled by a 2010 RDA grant. Whiting Mayor Joe Stahura says the grant not only funded the dramatic park makeover, but also led to other economic development elsewhere in Whiting. The park, new restaurants, new residential and retail development, and a new baseball stadium are transforming Whiting into a popular year-round destination location.

The Whiting lakefront is one of several Marquette Plan projects the RDA has funded in Whiting, Hammond, Portage and Gary. Overall, the RDA and lakeshore communities have invested more than $200 million in the Lake Michigan shoreline since 2006. Over the next ten years, these investments are projected to generate more than 1,000 jobs and will add $93 million a year to the region's total economic output by 2025.