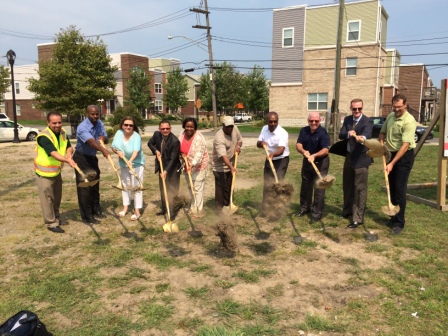 Ground was broken earlier this week on a new retail development in East Chicago. It's another element in the city's Waterfront Revitalization Initiative, which is funded in part by a $17 million grant from the RDA.

Mayor Anthony Copeland, along with Regional Development Authority Executive Director Bill Hanna and several other officials turned over shovels of dirt where new shops will stand.

The first phase at 2100 Broadway will contain five shops over 6,000 square feet, while across the street at 2105 Broadway a project will house seven storefronts in 8,200 square feet. The former U.S. National Bank building will stay intact, Copeland said.

Video of remarks by the Mayor and others prior to the groundbreaking can be seen here:

To date, the RDA and local communities have invested more than $200 million in shoreline improvements in Hammond, Gary, East Chicago, Whiting and Portage over the past ten years. This investment is projected to create more than 1,000 jobs, primarily in the tourism and hospitality industries, and add more than $90 million annually to the region's economy by 2025.