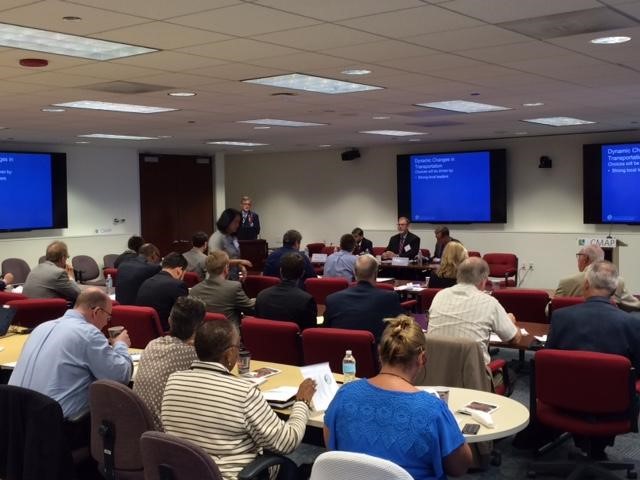 Northwest Indiana Regional Development Authority President and CEO Bill Hanna recently had the opportunity to update stakeholders in Chicago and Indiana on the RDA's vision for commuter transit and transit oriented development (TOD) in the region. The Alliance for Regional Development, a tri-state organization focused on Northwest Indiana, Southeast Wisconsin and Chicago/Northeast Illinois, held an event last week focused on commuter and freight rail.

Hanna also had the opportunity to speak to members of the latest class of Leadership Northwest Indiana during their briefing on economic development in the region earlier this week.

In both cases, Hanna stressed the benefits of improved connectivity to Chicago, including higher property values, expanded job opportunities, and making the region more attractive to both businesses and residents. The RDA's vision includes not only the expansion of the South Shore commuter rail system via the West Lake Corridor to Munster and Dyer, but also contemplates significant investments in the existing line. Fully double tracking the South Shore from Gary to Michigan City and modernizing stations in locations like Miller will improve service and bring in new development, Hanna said.

Since our inception in 2006, the RDA has invested about $30 million in regional transportation projects, including new rail cars for the South Shore commuter rail line, and parking and station improvements for the ChicaGo Dash service. Commuters who use these services every day to travel to jobs in Chicago bring back a combined $430 million in personal income annually to spend on goods and services here in Northwest Indiana. The West Lake Corridor expansion will result in an additional $231 million in personal income for the regional economy.