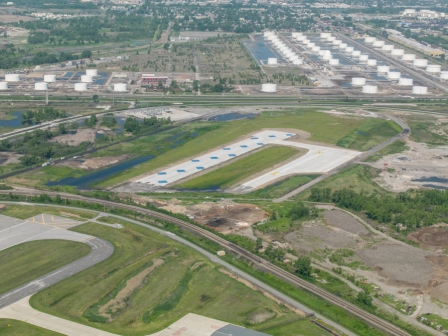 The last of the pavement has been poured on the runway extension at the Gary/Chicago International Airport, and the facility is on track for completion in a little less than two weeks.

The $174.1 million runway expansion will lengthen the main runway to 8,900 feet from its current 7,000 feet, allowing it to handle larger planes. It will also add federally mandated safety zones to each end.

The last construction projects now underway deal mainly with environmental remediation, said airport spokeswoman Emily Tapia-Lopez. Planes have been able to use the current 7,000-foot runway without interruption during the expansion project.

The State of Indiana and the RDA have invested a total of $50 million in the rail relocation and runway expansion project at the airport. According to a return-on-investment analysis done in 2012, the airport expansion will generate more than 2,000 new jobs, primarily in transportation, warehousing and manufacturing, by 2025. The RDA is currently considering a request from Gary for a $7.5 million matching grant to improve road access to industrial sites near the airport to further encourage development.