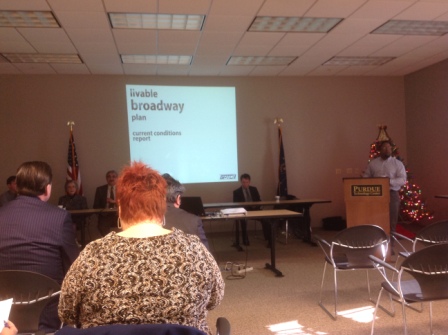 Expanding local and commuter bus services is under examination in multiple communities.

In November, the Regional Development Authority (RDA) hosted an update on the Gary Public Transit Corporation's (GPTC) Livable Broadway initiative. Livable Broadway is a study of how GPTC can improve bus service in Gary, Merrillville and Crown Point while also enhancing economic development. The Broadway corridor is the backbone of GPTC's system, carrying 355,000 riders a year.

The simplest measures drew almost unanimous support in snap key-pad polling of the audience, while more ambitious ones had the audience splitting votes.

Planners hope to present a road map to improving the corridor this spring. Meanwhile the cities of Portage and Hobart are both embarking on mass transit studies in the wake of the success that Valparaiso has had with its V-Line service. Hobart and Valparaiso have also discussed the potential for Valparaiso's ChicaGo Dash commuter buses to stop in Hobart.

Since our inception in 2006, the RDA has invested about $30 million in regional transportation projects, including new rail cars for the South Shore commuter rail line, and parking and station improvements for the ChicaGo Dash service. Commuters who use these services every day to travel to jobs in Chicago bring back a combined $430 million in personal income annually to spend on goods and services here in Northwest Indiana. Currently, the RDA is working with local, state and federal officials to expand South Shore service to Chicago. That expansion, the West Lake Corridor, would result in an additional $231 million in personal income for the regional economy. For a summary check out our infographic on transit here.