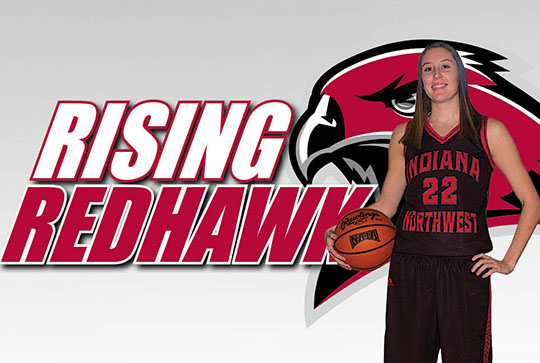 From December 1 – 7, we highlighted the performance of four of our student-athletes and asked you to vote for a winner.

With 64.2% of the votes, you have named Women’s RedHawk Basketball Player Nicki Monahan as our Indiana University Northwest’s Rising RedHawk of the Month for November.

"Nicki is off to another outstanding start to the season and has emerged as our team leader and one of the best players in the nation" states Head Coach Ryan Shelton.

Nicki is averaging 21.4 point per game. She leads the RedHawks in scoring and is second in assists. She was named to the Viterbo All-Tournament Team and scored a season high 33 points in a 72-64 win over Holy Cross College on Nov. 29

“Nicki is the kind of student-athlete that we strive to have here on campus and participate. She does well in the classroom and is involved on-and-off the court. She has participated in the inaugural Walk-for-the-Hawks this past fall and she donated her time with Habitat for Humanity last spring” said Athletic Director Kristofer Schnatz.

This award is voted on by fans through an interactive web poll on the IU Northwest Athletics home page at www.iunredhawkathletics.com. Each month of the season, at least four student-athletes will be nominated for the title of Rising RedHawk as we continue to highlight performances of our young men and women.

Congratulations to Nicki Monahan, November’s Rising RedHawk of the Month!