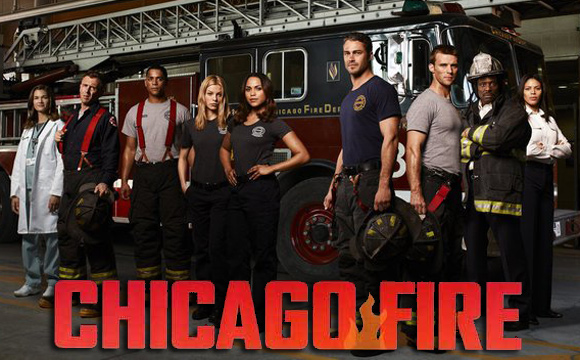 Who among us can say that they never wanted to be on TV? So many of us have had the childhood dream of appearing on national television. For some lucky locals, that chance finally came.

Recently, some runners from Northwest Indiana had the incredible opportunity to be extras in the hit series Chicago Fire. The NBC drama is about the intense trials and personal lives of fictitious members of the Chicago Fire Department. One of the extras had this to say.

"I had a fun time working as an extra on the show. My parents and my sister watch it plus obviously playing a part I knew a lot about helped. It was cool to see the whole process of shooting a live action TV show. It was a long day for shooting but well worth it. Being so close to the stars was intimidating, but Eamonn Walker (the actor that plays Chief Bolden) was really cool! He laughed and joked with us the whole time. I met a lot of cool people from the Chicagoland area and would definitely do it again," said Luis Guillen Head Cross Country/Track Coach Wheeler High School.

These dedicated extras braved the harsh winter of 2014 while shooting. Just imagine spending long days outside during late February and early March. That's exactly what these runners did. Sometimes even Mother Nature can't stand in the way of good fun and a great opportunity. "Being a running extra on the set of the Chicago Fire series was a fun experience. It was two very long, frigid days! The staff took care of us, giving us hand and foot warmers, and hot meals and snacks. Without giving any spoilers away, it should shape up to be an exciting episode with lots of drama! There were many runners from the Chicagoland area, some of which were at the Boston Marathon during the bombing. They had interesting stories for sure. Runners always seem to be able to handle the weather and whatever conditions they are faced with. All 200 plus of us did so, in -20 windchill! It took a lot of organizing to make sure my kids were taken and picked up from school so I officially am retired from my brief acting career. Being there with good friends made it all the more fun with lots of stories, laughs and memories!" said Kathy Labus of Crown Point.

For many of the runners, it was their first time as extras. What could me more exciting? According to Amy Maciejewski, nothing's better than new experiences like this.

“Working as an Extra for Chicago Fire was different from anything I have ever experienced. It’s nice to see what goes on behind the scenes, and meeting all sorts of interesting people. I can’t wait until the episode airs, so we can see all the hard work come together.” said Amy Maciejewski

We can't wait either. The good news is the new season of Chicago Fire starts up on April 8th on NBC. Don't miss out on seeing members of our community being broadcast across the nation!