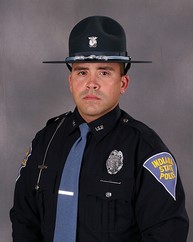 Last Friday, at approximately 6:00 p.m., Trooper Thomas Maymi, was off duty in his personal vehicle going east, at the intersection of US 20 and Waverly Road when he saw a gray SUV going west with an elderly female frantically steering the SUV from the front passenger seat. She steered the SUV south onto Waverly Rd, nearly striking a telephone pole, went across a gravel parking lot and into high grass where the SUV came to a stop due to the wet and muddy ground.

Maymi pulled into the parking lot behind the SUV and got out of his vehicle. The elderly female passenger also got out of her vehicle as Maymi asked what was wrong. She frantically replied that “I need an ambulance, I think he is having a heart attack!” Maymi ran around to the driver’s door of the Hyundai Santa Fe (SUV) and observed an elderly male (later identified as a 78 year old from Dyer, IN) who was unconscious, slumped over, and leaning to his right. The male had begun to turn blue and had a portable oxygen tank, supplying oxygen to him through his nose.

Maymi tried a sternum rub on the male which he did not respond to. He checked for a pulse and did not feel a pulse, nor did he see or hear any signs of breathing. At this point another person arrived and asked Trooper Maymi if they could help, Maymi told them to call 911 and let them know their location, and that there was a possibility of the elderly man having a heart attack.

Maymi began chest compressions but realized he needed to move the male to dry flat ground. Maymi grabbed the elderly male under his arms from the front and lifted him out of the driver’s seat and sat him on the ground. He then grabbed him from the back and under his arms and started to carry him through the mud and water. A Good Samaritan ran up to Maymi and assisted with carrying the elderly male approximately twenty-five feet to dry, flat ground.

His wife later related to Maymi that her husband had stopped to put air in one of their tires and struggled with this, which was unlike him. She also stated that when he got back into the SUV he told her he didn’t feel well.

The elderly male was taken to Porter Regional Hospital in Valparaiso for medical treatment.

Lt. Terry Gose, Commander of the Lowell Post, where Trooper Maymi is assigned, to stated, “This incident demonstrates more than just being at the right place at the right time. It serves as a reminder that an Indiana State Police Trooper is always on duty and the value of our training to serve our communities and the people.”