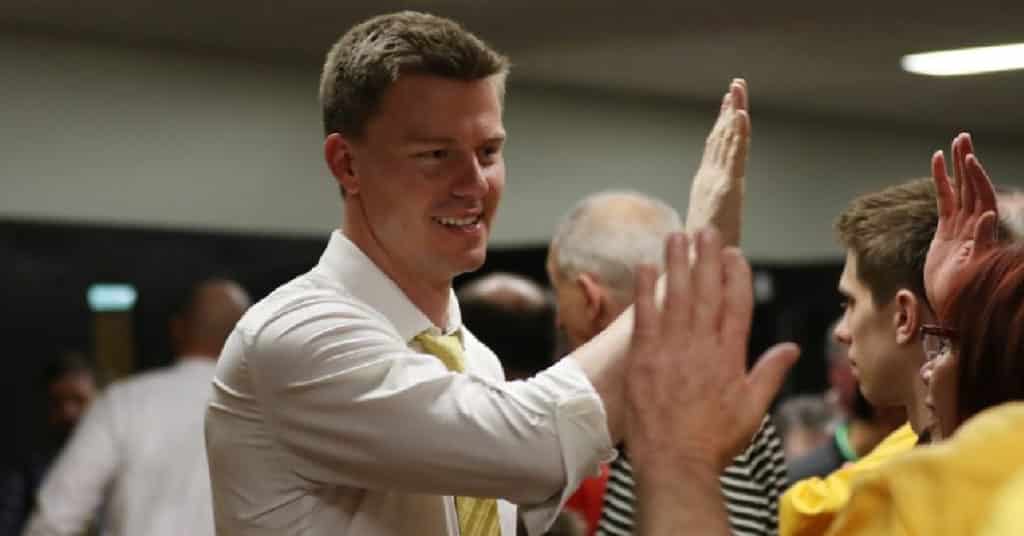 The campus, community, conference and nation witnessed the 2019-2020 Valparaiso University men’s basketball team accomplish something special in March, but those within the program knew they had something special long before the team arrived in St. Louis for the annual Missouri Valley Conference Tournament.

It all started during the team’s August Foreign Tour, which featured not only four preseason exhibitions on Canadian soil, but also valuable opportunities for team bonding. The players and coaches spent a day of the trip whitewater rafting, and during the excursion players began chanting “one team,” and then “one boat” with each row. That marked the organic birth of the season’s motto.

The concept of unity expressed through the words “one team, one boat” set the stage for the program’s rise. Those words helped the group navigate turbulent waters, both literally in Canada and figuratively throughout the season. The collection of individuals came together for something bigger, and it all culminated with Valpo becoming the first team since the Missouri Valley Conference went to its current tournament format in 1997 to play in the opening round and reach the championship game with three wins in three days.

As summer practices got underway, the team’s recently-renovated practice facility featured six simple words – or two words, really, repeated three times – etched behind the basket as a reminder of what Valpo Basketball is all about.

“Our main goal during the offseason was that we wanted our team to be a team,” head coach Matt Lottich said. “We want everyone to be more focused on the team than on themselves. Our saying is ‘team over me,’ and our players have done a great job of implementing that. They have bought into one another, and it’s as close of a team as we’ve had in a long, long time.”

Lottich implemented weekly culture meetings, where players and coaches engaged in conversations about life beyond basketball. They read books about adversity and shared varying perspectives and reactions with one another.

“It’s always good to have a foundation for culture and to make sure that everyone is bought in,” senior Ryan Fazekas said at the MVC Tip-Off event prior to the season. “We all have the same goal and we’re all fighting for the same thing. We don’t have someone who is lacking and hurts the rest of the team. It’s been a big emphasis and we’ve really enjoyed it.”

After Fazekas scored a career-high 23 points in a thrilling two-point win over Toledo to open the season, the fifth-year senior had his history of frequent injuries rear its head in only the second game of the season on Nov. 9 at Saint Louis.

The 6-foot-8 sharpshooter from Chesterton, Ind. fell to the hardwood after taking a charge and came down holding his wrist in agony. His diagnosis wouldn’t be released publicly until weeks later, but those who saw it didn’t need to be told – broken wrist.

When he addressed the media later in the season, Fazekas admitted that in the immediate aftermath of the injury, he thought his basketball career had come to an end.

“Before the season started, I told my dad if I can’t make it through a full season without any major injuries, I was going to wrap it up,” Fazekas said. “Sure enough, two games in, I break my wrist pretty badly. That was the icing on the cake for me. I was ready to call it quits.”

Although no one would have blamed Fazekas for hanging up his basketball shoes, he instead sustained his complete commitment to doing everything in his power to help his team. He turned his attention to rest, recovery and eventually rehabilitation. After missing 17 games, Fazekas returned on Jan. 23 at Missouri State, and he remained healthy enough to stay on the court for the season’s duration.

The loss of Fazekas was far from the only obstacle Valpo Basketball faced during the 2019-2020 season. Only two players – Donovan Clay and Eron Gordon – played in all 35 games, while most battled through bumps and bruises along the way.

Just hours before the Feb. 25 home finale against Missouri State, the Valpo coaching staff received word that Javon Freeman-Liberty had been diagnosed with mononucleosis. Despite the team’s leading scorer being suddenly sidelined, Valpo downed MVC preseason favorite Missouri State 89-74. The shorthanded victory was not only a significant one in the conference standings, but also one that reinforced the “one team, one boat” mantra, a “next man up” mentality and the team culture that the program has developed.

Going Beyond the Expected

Each member of the program contributed to creating the culture surrounding Valpo Basketball in 2019-2020, but if there’s one person whose story best exemplifies what the program and University are all about, it’s John Kiser.

Kiser went from a non-scholarship walk-on as a freshman to a member of the MVC All-Tournament Team and a starter throughout his team’s Arch Madness run as a senior. Following his senior year of high school, he had two offers to play college basketball and no Division-I offers before his AAU coach helped him land a workout at Valpo with associate head coach Luke Gore. He was offered a walk-on spot, and a week later, he started summer classes. He jumped at the opportunity to receive a degree from Valpo’s nationally-ranked engineering program while also playing Division-I basketball for a program rich with tradition.

“Coming in, I knew I could possibly earn a scholarship, but I’d have to work for it,” Kiser said. “That taught me that not everything is just given to you in life.”

The mechanical engineering major thrived in the classroom throughout his four years and currently holds a 3.53 cumulative grade point average despite juggling the time demands of a rigorous academic load with those of being a Division-I athlete.

“John has showed what hard work, perseverance and resiliency will do,” Lottich said. “He is the backbone of what we’re trying to encourage our team to be like. It’s great having a player like John Kiser.”

Kiser added another layer to his story with his most resilient accomplishment yet after suffering an ankle injury on Feb. 12 vs. Southern Illinois. When one of the program’s toughest players hit the floor and needed helped off, everyone in the Athletics-Recreation Center knew it was serious. In the moments following the game, Lottich feared that the career of the player he called his “glue guy” was over.

But as he had time and time again, Kiser bounced back. He missed just two games before returning to play in the final three games of the regular season and the four MVC Tournament games. He did so despite battling through pain, playing on two ruptured ligaments in his ankle. Not only did Kiser play, but he did so at the highest level of his career, making key contributions in the quarterfinal upset of Loyola before scoring a career-high 17 points in the semifinal triumph over Missouri State.

One life lesson Matt Lottich’s program taught players and fans alike over the course of the season can be captured in three simple words – never give up.

The team made improbable comebacks seem ordinary. Like everything else associated with Valpo Basketball in 2019-20, it all started in Canada. The team trailed 90-80 with 4:56 to go in an Aug. 11 exhibition against Concordia before closing with 14 straight points to win 94-90. During the season, Valpo erased double-figure deficits to win six more times.

The team’s final and most notable comeback came in the MVC quarterfinal, when Valpo climbed from 18 behind to knock off Loyola 74-73. It was the fourth time in the long history of the MVC Tournament that a team trailed by 18 or more and rallied to emerge victorious.

“It’s the heart of this team,” sophomore Daniel Sackey said. “Everyone on this team has a big heart. Everyone is so selfless. Out of respect for our seniors, respect for ourselves and respect for our program, we knew we had to at least go out with a fight. That’s what we did, and we ended up coming out of it with a win.”

The 74-73 victory over the Ramblers, highlighted by Fazekas’ game-tying 3-pointer with 11 seconds left in regulation and Gordon’s game-winning layup with three seconds left in overtime, marked the program’s arrival as a third-year member in the prestigious Missouri Valley Conference.

Gordon’s last-second shot etched his name alongside elite company in Valpo lore. He became the third Valpo player since 1992 to hit a game-winner in the final five seconds of a conference tournament or postseason tournament game, joining Bryce Drew in the 1998 NCAA Tournament and Ryan Broekhoff in the 2013 Horizon League Tournament.

Although Valpo fell to Bradley in the MVC championship game and finished one win shy of reaching the NCAA Tournament, the three wins in three days showed everyone the program’s potential. And that was just the beginning of successes to come during the Missouri Valley Conference Era of Valpo Basketball.

What happened over four days in St. Louis showed the fans, the conference and the nation what those close to the program already knew – there’s something special happening within the Valpo Basketball program.

The program quickly found success after taking on the new challenge of joining a prestigious, competitive conference with a rich basketball tradition. It’s a story about not settling for anything less than one’s full potential, and a story about persevering through the obstacles that came with the transition to The Valley, including a last-place finish and first-round tournament exit in Year 1 that was atypical of a Valpo program with a storied tradition.

The 2019-2020 team featured just five returning players from the previous season. Now, the core of the team is expected to remain intact, with only two graduating seniors among the 14 players on the roster.

The culture created and the lessons learned in 2019-2020 all started with Lottich, a man who embodies the spirit of the program and the University. His faith, selfless attitude, upbeat demeanor and belief in his team helped create an atmosphere where the student-athletes improved and thrived on and off the court. It’s those attributes that will help Lottich steer the ship – with one team in one boat – for the accomplishments to come.

“At about this time last year, it may have looked like the program was in a bad spot,” Lottich said. “It looked like it was falling apart, but it was really just coming together. We have young players who got better throughout the season. The foundation is here, so we’re going to continue to build on it.”