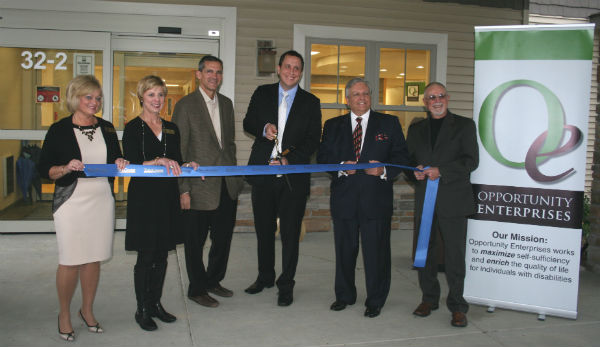 David Stupay, President and CEO of Opportunity Enterprises, cut the ribbon on the new wing of their OE Lakeside Day Services Facility on Wednesday, October 30. He was joined by Valparaiso Mayor Jon Costas, OE Board Chair Lee Lane, and Valparaiso Chamber of Commerce President Rex Richards, along with staff and supporters.

The facility is home to three of OE’s day enrichment programs for men and women with disabilities. “This project has been three years in the making,” said Stupay. “And the results have been awesome! Our participants are blossoming out here, enjoying the natural setting and robust curriculum schedule. This building has the capacity to serve nearly 300 individuals, and we are not done with improvements to our Lakeside campus.”

Just north of the new wing of the day services facility, OE also constructed an accessible 8-unit apartment building that is now home to 20 OE participants. “This apartment building meets the accessibility needs of our participants beautifully,” said OE COO and VP Ellen DeMartinis. “And we couldn’t have done either of these projects without the support of our community.” More than 700 individuals and businesses from Northwest Indiana contributed to the agency’s capital campaign, which raised nearly $4 million.

Costas spoke briefly about the impact of Opportunity Enterprises on Valparaiso and the surrounding region, stating that “OE is all about amazing people serving amazing people, and I look forward to OE’s continued growth.”

Lee Lane reminded those in attendance how much their support has mattered to the participants of OE and read a letter from Congressman Pete Visclosky, who was unable to attend, “It is my hope that the addition of this building will complement the outstanding services for which Opportunity Enterprises is well known, and that its programs will improve the quality of life for all those who seek these services.”

Rex Richards concluded the short ceremony with the words, “OE is a large part of what makes Valparaiso one of the best cities in the State of Indiana.”

With 157 acres to develop, OE is planning on constructing additional apartment buildings among other possible improvements. “We will invest in projects that make financial sense for us as an agency and those that serve our mission,” said Stupay. “At the end of the day, that is our most important task: to serve men and women with disabilities. Every day we are making a difference in their lives, and our Lakeside campus is an instrumental part of that work.”

The property is 157 acres. The original building is 13,000 square feet and the new wing is 19,000 square feet. The apartment building is a two story 8-unit accessible building that now houses 20 individuals. The property was purchased in 2007, the capital campaign “Build OE Lakeside” was launched in 2010, the groundbreaking for the new wing and apartment buildings took place in August of 2012, residents began moving into the apartments in March of 2013 and programming began moving into the new wing of the day services facility in September of 2013.