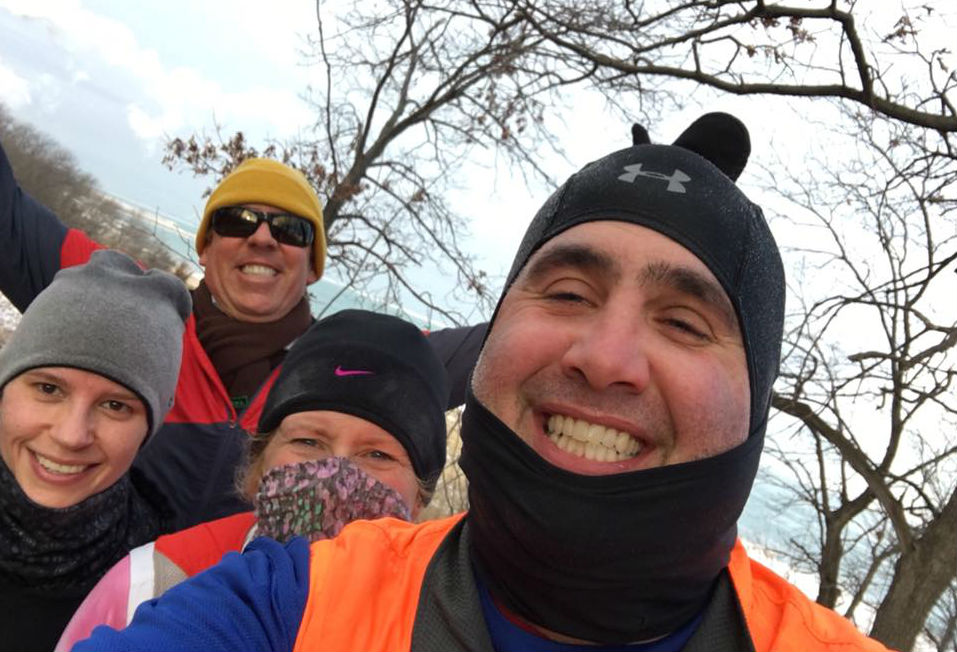 When the winter season hits Northwest Indiana the greatest asset a runner can have is someone running alongside of them, stride for stride through the sloshy snow. As temperatures drop and snow begins to fly, these special groups of runners look to one another to inspire them, and help them overcome the challenges they never thought they could tackle.

“I think running with groups helps keep you accountable to run, doesn’t matter if it is winter, spring, summer or fall,” said Tom Little from Harbor Buick GMC. “The groups also help you get through those runs that really, really suck, and you are struggling through.”

Getting to meet once a week, chat with friends, and the feeling of accomplishment after coming back from a run when the temps are biting, the wind is bitter, and there’s snow on the roads, is what keeps Becky Kreiger from Porter County Parks and Recreation going.

“There were a few mornings where it was below zero with the windchill,” Kreiger said. “I was meeting a group so there was no way I was going to bail.  If I was just going to run in my neighborhood – then I would have bailed.  When you are meeting friends and you are the organizer of the meet up to run you show up. Even if it’s cold.  After the first half mile – you’re warm.  You have the added support to push and cheer each other on and then celebrate when finished with the cold run.  You kind of feel like you can conquer the world after a run like that.”

Along with the cold temperatures and snow come other challenges runners must face. Ice and frozen, uneven snow is one of Little’s biggest fears.

“Ice can be anywhere and it is typically dark when I run during the week so I am always keeping an eye on the ground,” he said. “It will jump up and bite you in the butt and down you go.  I run a lot of trails and with the hikers and skiers, they can make the snow a little uneven for a runner especially when it is frozen, great for twisting an ankle or injuring yourself.”

Little touched on another big challenge runners face in the winter months: darkness. As the time changes and we set our clocks back an hour it means one less hour of daylight in the evening when a lot of runners are active.

“I started my group so my female friends could avoid running in the dark by themselves at least one night per week,” said Lorie Arnold. “It is much easier to get out the door in the dark and cold when you are meeting a group of other crazy people! Nothing beats running outdoors with friends.”

“The lack of light makes it harder,” said Joe Reeves. “With the time change and darkness it is harder to stay motivated and to have energy.”

When it comes to overcoming these challenges though, Reeves says the feeling of knowing someone else is right there with you, facing the same obstacles and pushing past them is what keeps people going.

“Running with a group helps keep people feeling accountable. If you tell someone or people you're going to be somewhere it makes it easier to force yourself outside in the cold to stay true to your word.”

“The Northwest Indiana running community is a tight group,” Reeves said. “When Liz got killed I know a good chunk of people personally didn't know her but because she is a part of OUR community everyone got out to support her memorial run and was deeply affected because we are still all connected in our love of the same hobby.”

Echoing those sentiments, Kreiger said, “I have met many people who are new runners and enjoy the group atmosphere and who have become more involved in the running community. When things happen we all come together for support (Liz’s memorial run).  Together we have created things to help the community.  We know that there’s a diverse running community and it can support various meet ups on the weekend, whether Saturday or Sunday or running on the trail or the road.  I have made many great friends through running.”

Whether it’s seventy degrees and sunny or thirty degrees and snowy, the Northwest Indiana running community is as strong as it’s ever been. As more and more people get involved, the health and happiness they share will continue to spread throughout the Region.