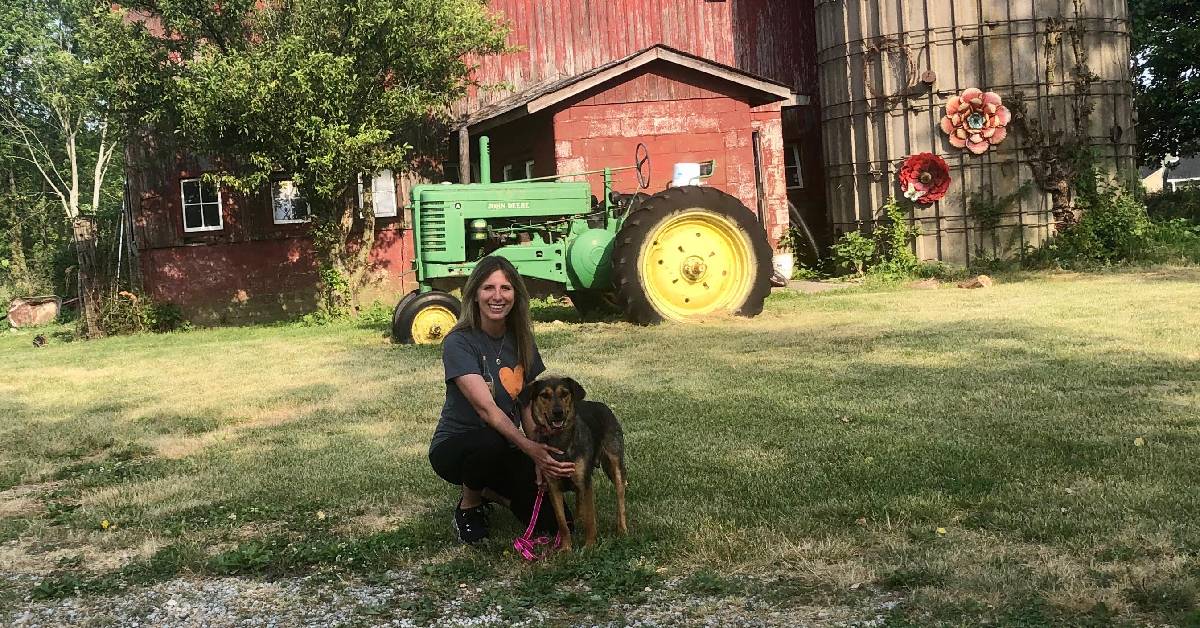 Both women are dedicated volunteers and have opened their homes to dogs that need a little TLC. They often foster soon-to-be moms and litters as well.

“I do fostering in the home, usually puppies and their mothers,” Gilliana said. “Right now I have a litter of three. The litter was bigger but unfortunately the mother didn’t survive so they were split up.”

Thibideau said, “We have fostered a lot of moms and litters at our house which is super fun and exciting. I have also fostered a senior dog who I just fell in love with.”

“In fact, my parents ended up adopting him,” she added. “He had been at Porter County Animal Shelter for nine months and nobody had shown any interest in him. When I went to Lakeshore Paws to pick up a puppy to foster, Jeanne Sommer said, ‘Don’t take that puppy. Look at him!’ He just sat there so nicely. He was a prince of a dog. I’m so glad he ended up with my parents.”

In addition to fostering dogs, Thibideau has a large assortment of other animals.

“I have several dogs, cats, chickens, and a bunny,” Thibideau said. “We live out in the country. With seven acres, we’ve got space.”

Gilliana also notes that she and her family live on a working farm with pets of their own.

“At this moment we don’t have any farm animals,” Gilliana said. “However,  we usually have miniature cattle or goats and other various types of critters here.”

While Gilliana’s property is devoid of farm animals, her family does have two dogs. They have a 13-year-old black lab named Tater, and a 4-year-old golden retriever named Lucy. While Gilliana’s family did not originally intend to adopt Lucy, they were happy to add her to the family.

Gilliana formerly raised puppies to be guide dogs for the blind. Lucy was one of the puppies they were training but she was what they called career-challenged.

“She didn’t have all the qualities it took. They say ultimately the dogs choose whether or not that’s the profession they want to do and they said she chose not to. I thought, ‘Well, she just missed the pool that we have, that’s all.’ She wanted to be back at home, so we just took her on as a pet,” Gilliana said.

Gilliana and Thibideau appreciate that fostering and volunteering for Lakeshore PAWS is something that worked well for their families in serving the community.

“It’s something that my kids were able to get involved in and help with,” Gilliana said of volunteering at the facility. She and her kids like doing good for animals who haven’t had such a good past. Gilliana claims that she could not do it all on her own.

Thibideau is grateful for their fostering program, since she began volunteering when her kids were young.

“I didn’t really have the time to go to a center for a couple of hours,” Thibideau said. “In their early days, Lakeshore PAWS really only offered fostering options. That was a great way for me to be able to give back and volunteer, without having to leave home.”

Gilliana noted some changes brought on by the pandemic.

“Some things changed, but not drastically. They weren’t having members of the public in there, which was kind of nice because we were able to focus on the dogs and deep cleaning and getting things done,” she said.

“It changed a lot at the center,” Thibideau said. “It was only open by appointment and we held meet-and-greets outside. They did a great job of keeping the volunteers safe, with stringent guidelines in place regarding masks and social distancing.”

While things may have looked different at the Lakeshore PAWS shelter over the last few months, Gilliana and Thibideau were quick to point out the positives.

Since the public had limited access to the dogs, Gilliana notes that the pandemic allowed her to do what she likes best.

“There are some volunteers who like walking the public through the facility and talking about the different animals,” Gilliana said, “but I really enjoy being hands-on with the animals by walking them and taking them off-site, so they get a break from the facility.”

Thibideau was glad about the time the pandemic gave her to spend with her foster dogs and her kids.

“For me, it was perfect time to say, ‘Hey, do you have a pregnant mom that needs a place to be?’ It was a great pandemic project for me and my kids. It kept us busy.”

Gilliana has only one regret in helping with Lakeshore PAWS.

“I kind of wish I would have gotten involved sooner because it is such a positive environment,” she said. “When I do go to the facility, I look forward to it because it’s kind of like therapy.”

“I’m really proud to be a part of the volunteer staff at Lakeshore PAWS,” she said, “because I think that they have filled a real need in the community. They have done a great job of starting from scratch and building a really amazing shelter, process, and program for dogs.”