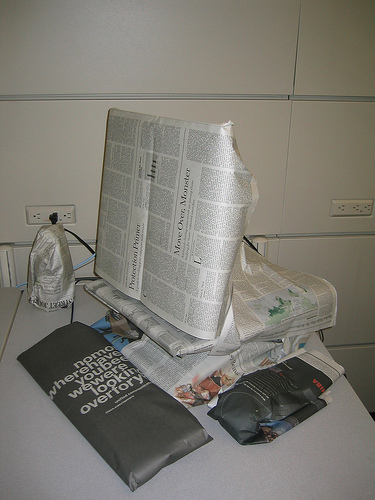 Challenges abound in the newspaper industry as it struggles to reconstruct a profitable model. While many anticipated just having subscribers pay for access to online content, it seems the potential subscribers have other ideas.

As someone who’s worked in community journalism, I understand both sides. I’d say people need a viable, authentic source for unbiased news, although there’s nothing to say a thorough, non-ideological blog couldn’t provide the same service with a staff. But, how would he/she get paid? The answers are out there, we just need to keep searching. In the meantime, here are some interesting poll results from CNET:

Would you pay to read your favorite newspaper online? Most say no, at least according to a new Harris poll.

With traditional print newspapers struggling to turn a profit, many have turned to the Web as a means to stay afloat. While some offer their online content free of charge, other papers have played around with subscriptions by charging readers a monthly fee. But that strategy may backfire, says a Harris poll released Wednesday.

Among more than 2,000 online adults surveyed, 77 percent said they wouldn’t pay anything to read a newspaper’s stories on the Web. And among those willing to pay, 19 percent would cough up between $1 and $10 a month; only 5 percent would shell out more than $10 each month.

The poll also revealed what many newspapers have already experienced–that readership of traditional news is steadily dropping. Just 43 percent of the people surveyed said they read a newspaper each day, either in print or online. Around 72 percent read a paper once a week, while 81 percent read only once a month. And 10 percent said they never read a newspaper.

One factor in the decline of the daily newspaper is age. The younger you are, the less interested you seem to be in reading the daily news. Among folks 55 and older, 64 percent still read a daily paper. Among those 45 to 54, 44 percent catch a daily paper, while 36 percent of adults 35 to 44 do. But of those 18 to 24, only 23 percent said they read a paper each day, while 17 percent said they never do.