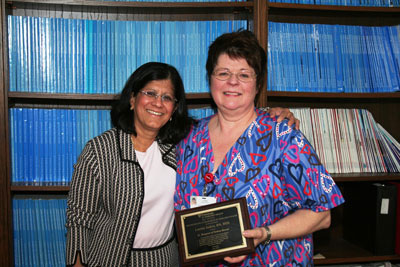 The annual awards are presented during the American Nursing Association's National Nurses Week.

Loretta Juskiw, who has spent her 42-year nursing career at the Hammond Campus, was honored there; while Kay McElmurry, who has been at the Dyer Campus during her entire 30-year career, was awarded for her work there. 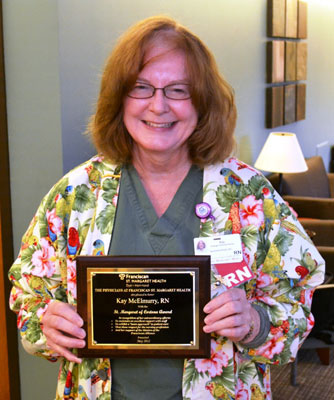 Hospital president Tom Gryzbek noted the "elite" honors reflect the high regard physicians hold for recipients. Physicians nominate nurses; the nurse with the most nominations is chosen.

Juskiw, a clinical radiation oncology nurse, said she was "honored that the physicians would consider me a role model for other nurses."

McElmurry, who said she became a nurse because she loves helping people, added she "was so honored to be chosen by the doctors and to work with such a great bunch of people."

Each received a cake, flowers and other gifts.

St. Margaret of Cortona joined the Third Order of St. Francis in the 1200s and chose to live in poverty, following the saint’s example. She founded a hospital for the homeless and impoverished in the city of Cortona, Italy and pledged her life to serving God through the hospital. She was canonized on May 16, 1728.