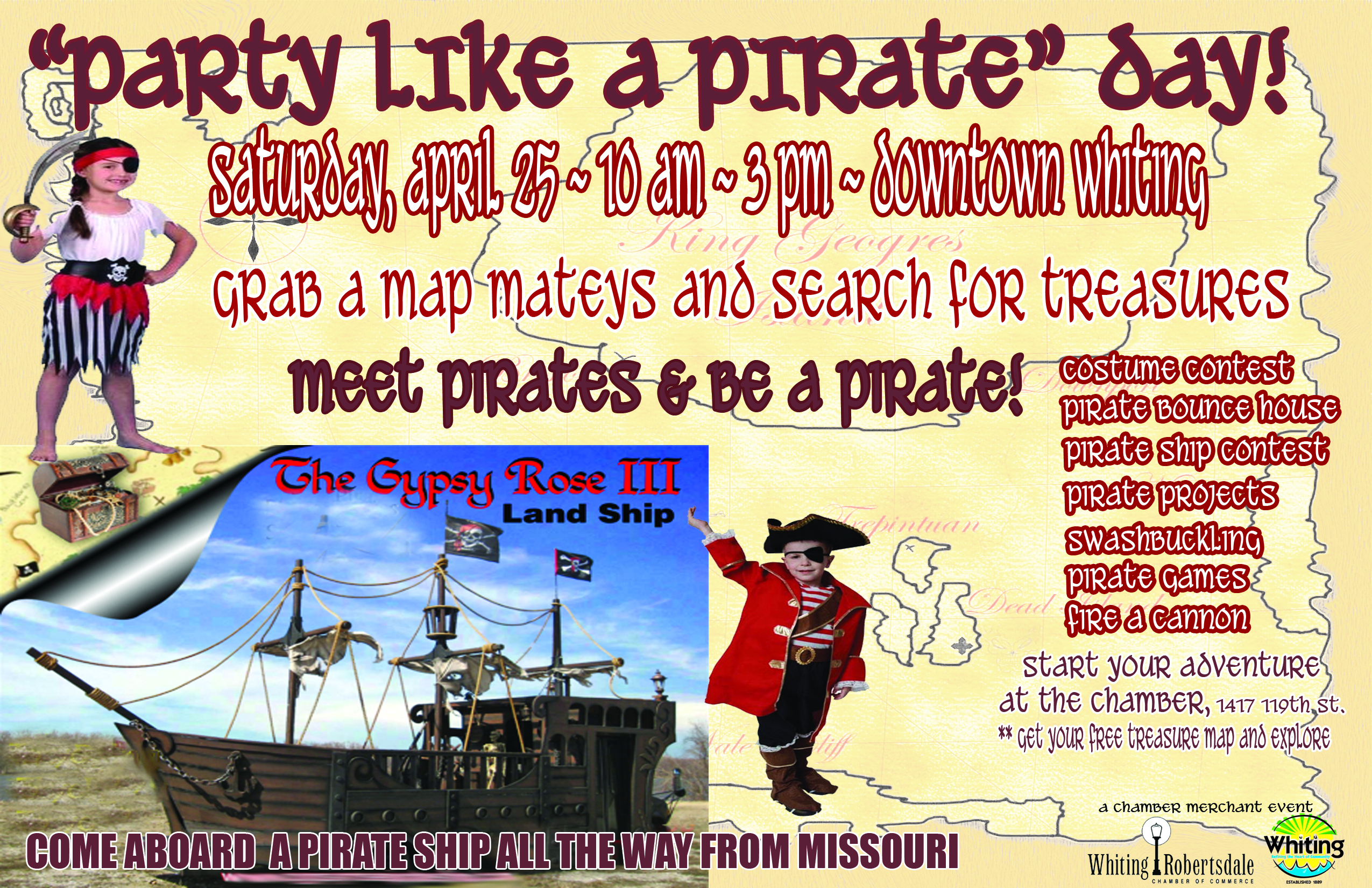 Ahoy Mateys what we say is true, the lovely city of Whiting is being invaded by the debauchery of pirates. This dreadfully fun event will commence on Saturday, April 25 from 10 am – 3 pm when the Gypsy Rose III Pirate Ship arrives from Missouri and docks right on Oliver Street in downtown Whiting.

This wildly fun day of pirate mania will include kids being able to board the large Gypsy Rose Pirate Ship, don pirate gear, swashbuckle and even fire the cannon (rest assured no walking of the plank will take place). The Gypsy Rose III has been seen all over the United States at great events such as the Jimmy Buffet Festival, Kenny Chesney Concerts and Key West Festival but now the ship will land in Whiting, Indiana for one day only!

But that’s not all. There will be plenty of pillaging to do as the streets will be lined with Pirate Photo Op Islands complete with skeletons of the last mates who didn’t make it out, Pirate Games and crafts including Studio 659, 1413 119th St., who will be helping children make their own pirate hooks. Pie Eyed, 1600 119th St., will be hosting the pirate costume contests with categories from infants to 18 years old. So be sure to come in your best pirate garb.

But before you start your adventures, stop by The Junkyard T-shirt Shop, 1504 119th St, who will be providing everyone an exclusive pirate name for the day so you make sure you’re the most menacing of pirates. Then head to the Whiting-Robertsdale Chamber of Commerce, 1417 119th St., for a treasure map that will take you on a scavenger hunt along 119th St. Once you have finished your hunt, return to the Chamber to try and open the treasure chest, if you do, a great booty will be yours…if not…well, I guess you’re just going to have to come see to find out.

A pirate bouncy house, face painting and pirate beard applications will abound as will the ability to get a pirate tattoo among your bicep (just fake of course). Uptown Evolution, 1438 119th St., will have a treasure digging excursion for prizes and for the grown-ups, Suncatchers, 1348 119th St., will feature a gold coin adult scavenger hunt in the store – find the coin, get a discount on merchandise.

A pirate has to keep up their energy so there will be plenty of grog and glog to eat and drink along the way including Beggar’s Pizza, 1326 119th St., who will be featuring a Kid’s Pirate Party Pack for $5.95 which includes a kid’s one topping pizza, drink and 4 game tokens.

For more information or for a photo of the Gypsy Rose III please contact Karen at the WR Chamber, 219-659-0292 or via email at Karen@WRChamber.com. This event is a joint partnership with the WR Chamber Merchant Division and the City of Whiting.