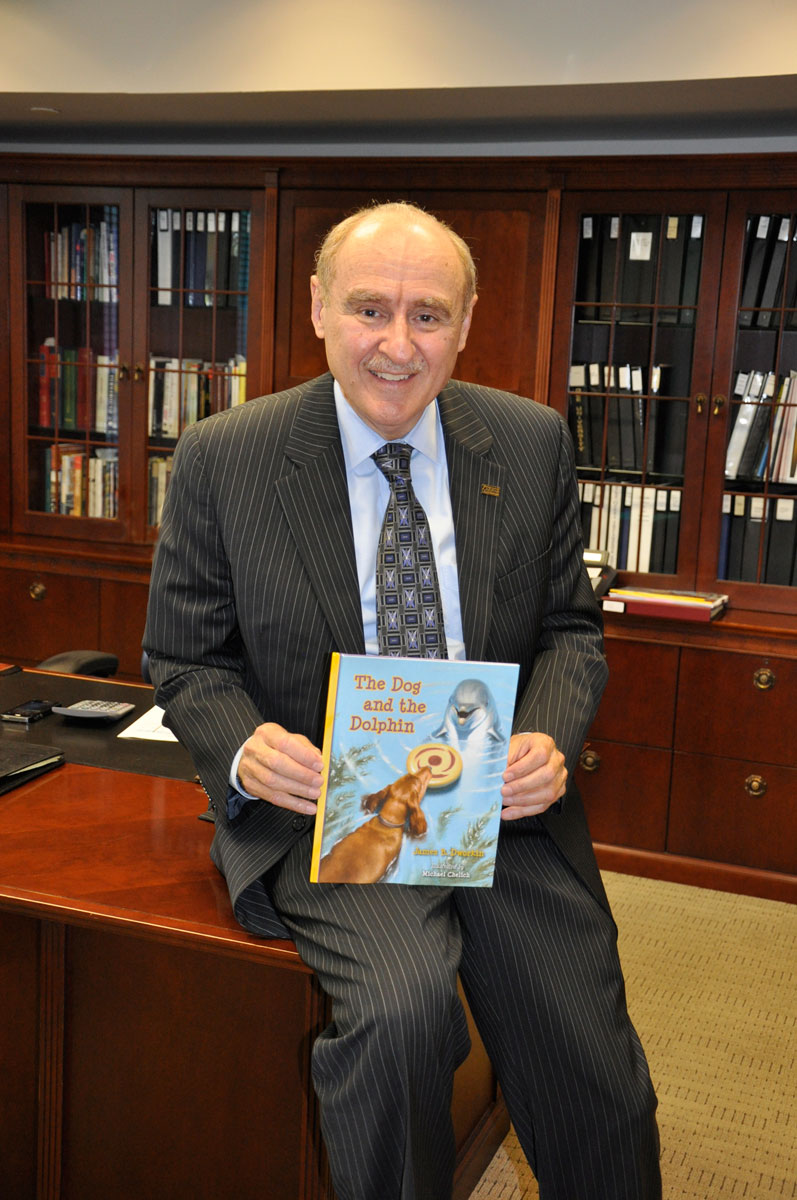 Purdue University North Central Chancellor Dr. James B. Dworkin will host a signing of his children’s book, “The Dog and The Dolphin” on Thursday, Dec. 18 from 1 to 2:30 p.m.in the lower level of the PNC Library-Student-Faculty Building, just outside the at the PNC Campus Shop. Light refreshments will be served.

Books will be available for purchase. Dworkin will also sign books that had been previously purchased. A portion of the proceeds from the sale of the book goes toward supporting programs and scholarships in the PNC Early Childhood Education program, which will be an enduring legacy of “The Dog and the Dolphin.”

The book is also available for purchase at amazon.com, in the Purdue University Calumet bookstore and through the website thedogandthedolphin.com.

The “Dog and the Dolphin” tells the delightful story of two unlikely friends who meet on a beach in Florida.

The children’s story was inspired by an interaction Dworkin observed several years ago while vacationing with his family on Sanibel Island, Fla. During a visit to the beach, Dworkin watched a dog, depicted in the book as an Irish setter named Red, wander the beach. The dog strolled around, sniffed here and there and seemed to be bored, said Dworkin. When the dog gazed into the water, it caught a glimpse of something that interested him. A dolphin was frolicking a short distance away.

Dworkin observed that the dog was clearly interested in the dolphin and it seemed like the dolphin noticed the dog on the beach. The dolphin appeared so interested in the dog that it would swim in the same direction that the dog ran. When the dog ran to the left, the dolphin followed. If the dog ran to the right, the dolphin changed direction too. The dog was so taken with his new friend; he tried to swim out to it with a Frisbee so they could play together. This story of an unusual friendship between a dog and a dolphin teaches valuable lessons of friendship and diversity as the story’s two characters form an unlikely, yet unmistakable bond.

Esteemed portrait artist Michael Chelich, of Munster, illustrated the story. As a first-time book illustrator, Chelich created amazingly detailed, life-like art to help to tell the story of what took place on the beach that sunny day.

Dworkin is an accomplished author and “The Dog and the Dolphin” is his first children’s book. He already has an inspiration for a second children’s book. Dworkin has written the books, “Owners Versus Players: Baseball and Collective Bargaining” (Boston: Auburn House Publishing Company, 1981), and “Reflections on the Transformation in Industrial Relations” (Scarecrow Press, 1989). He has also written and edited numerous articles and chapters for a variety of professional publications.

Information on readings and book signings will be available at www.thedogandthedolphin.com.