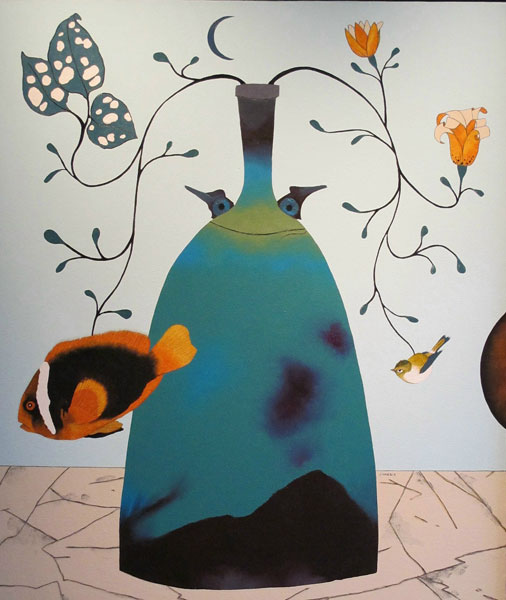 The Purdue University North Central Odyssey 13 Arts and Cultural Events Series will feature the exhibit, "The Surreal Art of Science by Jack Harris" from Aug. 12 to July 31, 2012 in the PNC Library-Student-Faculty Building Assembly Hall, Room 02 in the building's lower level. It is free and is open to the public and may be viewed by appointment only.

The show will feature 19 oil paintings by the late Jack Harris, formerly of Michigan City. This exhibit is made possible through the generosity of his wife, Daria Harris. His juxtaposition of super-realistic forms in a surrealistic environment takes a colorful and playful look at a variety of living things - fish, animals, vegetables, birds and other creatures. He also included everyday objects in his art, including a depiction of boxes.

Harris was a professor of Fine Arts at Roosevelt University in Chicago. He also was CEO of Harris Steel. Locally, he was a trustee of the Michigan City Yacht Club, was a member of the Long Beach Country Club and the Lubeznik Center for the Arts.


His works have appeared in the Chicago and Vicinity Show three times; three paintings and three sculptures have been featured in Art Scene on two separate occasions; the Deson- Saunders Gallery in Chicago; a contemporary still life was shown at The Renaissance Society at The University of Chicago; his work has been seen at the First National Bank of Chicago and in many private collections.

To schedule an appointment to view this exhibit or to obtain further information, contact Judy Jacobi, PNC assistant vice chancellor of Marketing and Campus Relations, at 219.785.5200 ext. 5593. Persons with disabilities requiring accommodations should contact Jacobi.