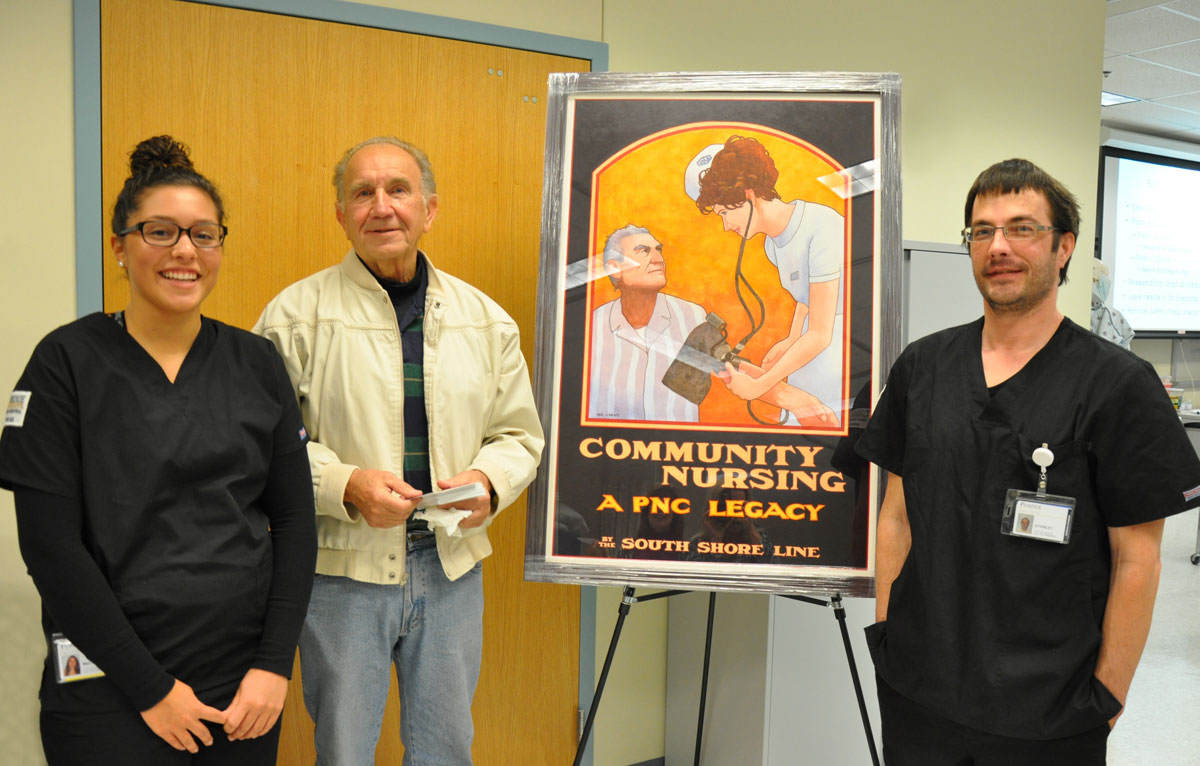 The Purdue University North Central Department of Nursing recently received a gift from long-time benefactor Stanley Kowalski that will serve to inspire nursing students as it honors a pioneer in local community health care.

Kowalski presented an original painting by Neil Kienitz in the style of the South Shore Line posters to the PNC Nursing Department that depicts his late wife Professor of Nursing Sandra Calkins Kowalski, Ph.D., and bears the notation, “Community Nursing - A PNC Legacy.”

The image of Sandra Calkins Kowalski was derived from a photo of her that was taken when she was a young nurse working with the Visiting Nurse Association of LaPorte County. The poster shows her tenderly caring for an elderly man and exemplifies the caring relationship and trust that takes places between a nursing professional and patient.

Stanley Kowalski visited the PNC Nursing lab to present his gift in front of a group of students in a Foundation of Nursing Practice class. He took time to visit with each student, talking to them about his wife, her dedication to her profession, how she was part of the PNC Nursing program and her role in helping to establish and grow the practice of community nursing in the area.

Looking at the poster, he noted that the artist accurately captured his wife’s physical appearance and pointed out that her compassion and concern for her patient was obvious.

“She dedicated her life to her profession and her community,” he said. “She would be so proud of all of you and what you are doing to carry on her legacy of nursing.”

PNC student Trey Padlo said that he was moved by Kowalski’s recollections of his wife’s accomplishments and her commitment to nursing and educating future nurses.

“It’s impressive to see how she impacted our curriculum today,” he said. “This is a great start for us as we look to the future.”

Student MaCahlia Reyes was happy that Kowalski took time to visit with the Nursing students. “He has an amazing passion for his wife’s work. We’re happy that he shared that to us at PNC.”

Kowalski presented each student in the Foundation of Nursing Practice class with a postcard-sized depiction of the poster he presented to PNC.

Posters made from the original painting will be displayed among the collection of similar works at The Framing Station in Michigan City and will be available for purchase. Proceeds will go to the Sandra Calkins Kowalski Community Nursing Fund to benefit PNC nursing students.

There will be a poster signing event at the Framing Station on April 3 from 5 to 8 p.m. as part of the Michigan City First Friday event.

Sandra Kowalski was born in Pennsylvania and earned her RN in 1960 from the University of Buffalo Edward J. Meyer Memorial Hospital School of Nursing. On Jan. 30, 1960 she married Stanley Kowalski, her high school sweetheart.

After the couple settled in LaPorte County, she dedicated her career to community health. She was the second nurse hired by the Visiting Nurses Association of LaPorte County and she worked to launch Michigan City’s Open Door Health Center.

Always continuing her education, she earned a degree from Purdue University Calumet in 1973 and a master's degree in nursing from St. Xavier University in Chicago in 1977. She earned her Ph.D. in medical sociology from the University of Notre Dame in 1989.

In 1973, she was hired in as one of the first PNC Nursing faculty members. While still teaching at PNC, she pursued her master’s degree, traveling to Chicago for class. Much of her master’s lab experience was completed at the Mile Square Clinic located at the Cabrini Green and Robert Taylor housing communities. Sandy taught at Valparaiso University for 23 years.

Dr. Diane Spoljoric, chair of the PNC Department of Nursing and associate professor of Nursing, said that Sandra Kowalski was one of her professors when she was a nursing student. “I know that community nursing was a passion of hers. She was a remarkable person. I remember one of her catch phrases was ‘it’ll be o.k.’ She left an impression on all of us. This painting will remind us of why we do the work we do.”

Kowalski’s heart always remained with community nursing. She served on the boards of the Visiting Nurses Association, Concerned Citizens for the Homeless, Minority Health Coalition and the Stepping Stone Shelter for Abused Women in Michigan City. She was a member of the Porter County Task Force on HIV/AIDS. She was a key to the development of the Pastoral Care Council of Notre Dame Church in Long Beach.

Her career was honored with the 1992 JC Penney Golden Rule Award in partnership with the United Way; the 1999 Exchange Club of Michigan City's Book of Golden Deeds Award and was recognized by Valparaiso University, Notre Dame University Alumni and the state of Indiana for her community service and contribution to learning.

While still in her 50s, she was diagnosed with Alzheimer’s Disease. To honor her life’s work, the Sandra Calkins Kowalski Community Nursing Fund was started in 2003 to provide support to PNC students who are pursuing an undergraduate nursing degree with emphasis on community nursing or public health. She passed away in May 2012 at the age of 72.

About a decade ago, Stanley Kowalski established The Sandra Calkins Kowalski Community Nursing Fund with the Unity Foundation of LaPorte County that is awarded to PNC students pursuing an undergraduate degree in Nursing.